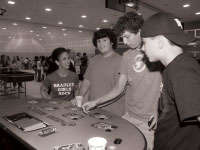 The first Late Night BU of this year was the most successful hosted so far with around 1,800 students in attendance.
“Since the event, we have sent out a survey to students asking for their feedback on the event and have received great reviews,” said Lyndsey Withers, the coordinator of alcoholic education and awareness programs. “People most enjoyed the caricatures, inflatables, airbrush pennants, custom street signs, photos and the food.”
While many students attended the Late Night BU hosted during welcome week, very few know about how much work it takes to coordinate each individual event.
“Late Night BU is coordinated by a staff of students,” Withers said. “There are two logistics coordinators who are also employees of the Markin Family Student Recreation Center. They help make sure that the events planned are feasible in the Markin Center.”
Graduate Assistant of the Student Activities Office Jordan Ticaric said she agreed.
“This year, there are event planners and supervisors that have been hired to do a lot of thinking for Late Night,” Ticaric said. “They collaborate, bounce ideas off each other and brainstorm together to think of ideas for events. There always needs to be a ton of ideas, because if hundreds of students are coming to Late Night, we need to have a variety of things for everyone.”
In addition, there is also a graphic designer who creates marketing materials, such as posters, for each program, as well as four event coordinators who are each in charge of an event per semester. The activities for their event are planned with feedback from the rest of the coordinators on the team.
Ticaric said she was on the team last year.
“We had five people, including myself, who represented the Markin Center, along with a student committee, think up ideas for Late Night BU,” she said. “The student committee would think up the ideas and logistics, and the five of us would then find a way to carry those ideas out.”
Withers said they are looking for new members to join the coordination committee.
“Members of the coordination committee will help brainstorm new ideas, volunteer at events, prepare for the event under supervision of the event coordinator and assist with any other jobs if necessary.”
Ticaric said she encourages students to join.
“Planning for Late Night BU is always super fun,” she said. “Last year we tried really hard to create a Halloween theme for the first Late Night, but this year we realized that students just really like to come to eat, hang out with friends, do crafts and have a fun alternative to drinking. Some of them may go out afterwards, but we still did our part to provide them with that alternative.”
Students who are interested in joining the coordination committee and would like an application should contact Lyndsey Withers at lwithers@bradley.edu.
More from NewsMore posts in News »