By Scout on March 7, 2010
Students interested in vaginas can further their education this weekend. 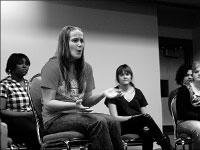 “People think vagina is a dirty word, and it’s really just an anatomically correct word for something we have,” said Jessica Dobson, co-director for The Vagina Monologues. “I think this is our best year yet.”
The Vagina Monologues is an annual student production of the play by Eve Ensler, who allows the production to be done royalty-free. The monologues, which aim to educate and stop violence against women, are at 7 p.m. tonight and Saturday in the Michel Student Center ballroom.
The production includes several scenes, many of which are monologues and some that involve more than one actress.
“Some of them will make you laugh – like a six-year-old saying her vagina smells like snowflakes,” Dobson said. “It also deals with issues like rape.”
This year’s profits go to the Center for Prevention of Abuse, which recently lost its federal funding. The center focuses on domestic violence, sexual assault and abuse, elder abuse and keeping kids safe. It provides education programs in schools and for those who have a history with abuse. It also has a shelter.
“They never turn anyone away,” Dobson said.
Through the show’s $5 admission fee, collecting money in residence halls and at Kroger, selling vagina-shaped lollipops and running a ‘skip-a-meal‘ program, where students could swipe their IDs twice in the cafeterias to donate money, Dobson said she hopes to raise $4,000 for the center. Last year they only raised around $2,000.
She said the lollipops, called Pussy Pops, sold out quickly.
“Some people actually acknowledge that it’s really good chocolate,” Dobson said. “Some people buy them because of the shock value.”
And that’s not the only part of The Vagina Monologues that aims for squirms.
“You need that shock factor to really get to women’s issues that are ignored,” she said, referring to the overt title of the production.
Dobson said she thinks many people are unaware of issues related to sexual abuse, such as the fact that one in six women experience rape or attempted rape at some point in their lives.
Dobson also said the shock factor doesn’t stop for those who have seen the play before, as each year the cast is entirely new, with the only returnees being the directors.
“When you get a new cast, you get a new view,” she said, of this year’s 23-strong ensemble. “Each piece really comes to life with a girl’s personality.”
Dobson said the shows are usually very crowded or sell out, and she recommends getting there early. Doors open at 6:30 p.m. both nights.
“When you come … know that there’s moments where you’ll be uncomfortable, moments where you will want to cry and moments where you cry because you’re laughing so hard,” she said.
More from NewsMore posts in News »