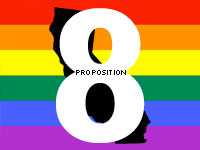 UWIRE – Students gathered outside the Library Quad today to protest Proposition 8, the statewide ballot measure banning gay marriage in California which passed Tuesday night.
Ashley Johnson, senior history major, said she opposed the measure since she is secure with her own marriage and gay marriage does not make her uncomfortable.
“What they do doesn’t affect my relationship,” Johnson said.
Travis Covle, junior social sciences major, was frustrated with the decision after campaigning against the proposed constitutional amendment. He said he had been following the proposition since the California Supreme Court legalized gay marriage in June.
“I just watched it all shatter last night,” Covle said.
Proposition 8 passed by about 400,000 votes, 52.2 percent to 47.8 percent. Ninety-six percent of precincts were reported this afternoon. The proposition’s strongest support came from the Central Valley with an additional large majority support from the Los Angeles County. The Associated Press reported that exit polls showed blacks and Latinos, as well as older voters, were more supportive of the measure.
Pride Center coordinator Alex Harris said she was demoralized by the measure’s victory and frustrated by the success of what she viewed as dishonest campaign tactics from the other side. She said there was “no rational reason” to deny a group of people their rights.
“The Californian people, I hate to say it, right now I have lost my faith in them and they’re stupid,” she said. “They’re sheep and they’ll believe what everybody tells them instead of looking in their hearts and figuring out that Prop. 8 was discrimination, plain and simple.”
Harris said that since Barack Obama is in favor of federal civil unions, she hopes this will lead to some kind of reversal. The next step remains unclear for gay marriage supporters.
Today opponents of Proposition 8 sued in the California Supreme Court seeking to force the Legislature to block the measure on the grounds that its scope amounted to a “constitutional revision” rather than an amendment and therefore required broader approval. The court rejected a similar argument earlier in the year.
More from NewsMore posts in News »