Students rally successfully for grants in the capital 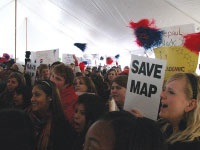 Even though the 1,000 or so students rallying for MAP grants last week were more than a block away from the capitol, their cries were undoubtedly heard by those inside it.
The group of students, including about 200 from Bradley, were gathered in Springfield to encourage legislators to reinstate MAP grant funding, which had been left up in the air when legislators failed to pass a full budget in July.
Student Body President Kyle Malinowski was the emcee for the rally.
“Being the emcee for the rally … is one of the moments I am most proud of in my college career, and my life,” he said. “Imagine being surrounded by thousands of students from around the state, all mingling and chanting for a single cause. I had the honor of introducing the Governor. It was so cool.”
Malinowski said being in the capitol when the bill was being debated was a powerful and educational lesson.
“I can not think of any more bold of a message and symbol for our law makers and legislators to show them that the MAP grant is not something that should be used as a political football,” he said. “In terms of the physical rally, it was truly a testament to our generation. With thousands of people chanting, mingling and pushing for a common cause.”
Mid-way though the rally, Gov. Pat Quinn brought some pleasant news to the group after the bill past nearly unanimously in the house.
And on the way back to Peoria, the students were told the final resolution had passed the senate, and they’d receive funding for next semester.
“It was a … powerful moment when we found out that the vote through the house was a sweepingly decisive one,” Malinowski said. “We got to see democracy in action that day. I mean we got the opportunity to check out the Senate chamber and trek around the capitol building. It was truly powerful.”
The money will come from the governor’s $1.2 billion discretionary pool of money.
However, future funding for the grants is a murky, as the resolution that passed only guarantees funding for this semester, meaning future years are left up in the air.
University President Joanne Glasser said the reinstatement of funding will undoubtedly help all students, and the future.
“I want to thank our state leaders for fulfilling their commitment to our students – the leaders of tomorrow,” she said.
More from NewsMore posts in News »