Students responsible for counting themselves in census 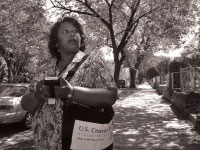 Students can no longer be considered part of their home households, at least not when it comes to the upcoming census.
Jomin Panicker, a junior organizational communication major, is working with the Census Bureau for a class project and said students are counted in the census depending on where they live the majority of the year.
Starting March 15, the U.S. Census Bureau will begin distributing census forms to students living in off-campus housing, but those living in dorms or fraternity and sorority houses will not receive their forms until April 12.
The forms need to be returned to the Census Bureau as soon as possible.
Panicker said the information students provide to the Bureau is vital.
“For every person who fails to participate, the city of Peoria loses about $1,000 in funding,” Panicker said. “Ten years ago Bradley was in the red zone, meaning they had a really low response rate.”
Panicker said it is especially important for off-campus students to watch their mailboxes for the forms.
“Students can no longer be counted under their parents,” he said. “You are now counted with your roommates or whoever you live with in Peoria.”
Senior photography major Kym Spooner said she had no idea she was now responsible for reporting herself in the census.
“It’s just something I didn’t even think twice about,” she said. “[My parents] take care of things like taxes and other forms that need to be filled out, so it just made sense to me that they should count me on their form.”
Panicker said his group is planning on attending the next Late Night BU to hand out information on how to fill out the census forms.
“We are going to hand out T-shirts, mini-basketballs, anything we could think of to get people involved with this,” he said. “We are even going to have a survey people can fill out, and once they do, they will be entered into a drawing for free plane tickets.”
The main goal of Panicker’s campaign is to get students more involved, he said.
“We are just trying to do whatever we can to encourage people to send the forms back,” he said. “It’s just so important to the city that this information be reported accurately.”
Around 18 percent of the city’s budget is based directly on census reportings, Panicker said.
“Many students complain about how bad roads are around Peoria, and this is a way of directly affecting how much finding the city gets to spend on fixing things like that,” he said.
Spooner said now that she knows it is her responsibility to fill out the forms, she will make sure she sends them back.
More from NewsMore posts in News »