Students shack on quad for Habitit for Humanity 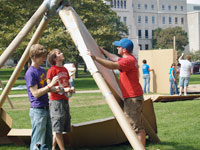 Bradley kids shacked up on Olin Quad for 24 hours Wednesday and Thursday for Habitat for Humanity’s annual Shack-a-Thon.

The idea is simple – build a shack made only out of cardboard and other materials that would be available to you if you were homeless.  For a $30 entry fee, organizations around campus joined in the fun.
“Our goal is to raise awareness about homelessness,” said Nichole Mahrt,  the fundraising coordinator for Habitat for Humanity. “The money we raise during Shack-a-Thon goes towards materials for the house we’re going to build here in Peoria during the spring semester.”
And raising awareness through Shack-a-Thon seems to be working for some students.
“It’s hard to ignore a bunch of kids in cardboard boxes on the quad,” sophomore biology major Liz Baney said.
The event included a variety of activities, from a bubble gum blowing competition to a Red Rover tournament and a pajama beauty pageant.
“When else can you say you’ve slept on the quad?” said Habitat for Humanity Treasurer Pam Goerlich. “It’s a lot of fun.”
The quad was filled with playful bantering, busy construction and some serious competitiveness. Shacks could win awards such as sturdiest, biggest, tallest and most creative. 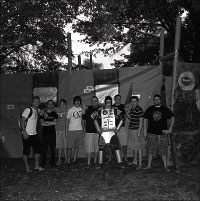 “We figure bigger is better, and we’ve got some tall members,“ Lambda Chi Alpha member Jasko Kamaric said while he built his fraternity’s shack.
Lambda Chi used over 900 pounds of cardboard on its massive structure. But the event wasn’t only about competition.
“It’s also a really nice thing for the freshmen,” Kamaric said. “It’s one of the first major events of the year on campus. Our guys are having a blast.”
Theta Chi used a different strategy.
“We’ve won sturdiest and biggest before.  This time we’re going for most beautiful,” Theta Chi member Andy Geracim said. “We’re going to have two towers and definitely going to incorporate a drawbridge.”
Shack-a-Thon also gives Habitat for Humanity a chance to shine.
The Bradley chapter has already built five houses in the Peoria area and is looking forward to its next project this spring, according to the Habitat Web site.
Junior psychology and French major Joanie Uhrich said she has participated in Shack-a-Thon every year she’s attended Bradley.
“It’s a good idea that Habitat has this,” she said. “It’s a lot of fun.”
More from NewsMore posts in News »