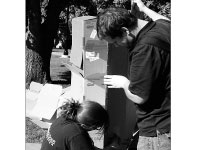 Students spent the night in boxes on Olin Quad Wednesday.
They slept there for Bradley’s sixth annual Shack-a-Thon, hosted by Habitat for Humanity.
“Shack-a-Thon gives students a chance to see firsthand what it is like to be homeless for a night,” said Brett Williams, the co-fundraising coordinator for Habitat. “It also raises money for us to use to help build a house in the Peoria area.”
Williams said the group raises its funds by charging a participation fee for every organization that takes part in Shack-a-Thon.
“It is really an easy way for us to raise money, because organizations are responsible for all of their own materials for the event,” he said.
Pam Goerlich, the president of Habitat, said many campus groups partake in the event.
“We have about 30 groups participate each year,” she said. “The organizations around campus give us a lot of support in this event.”
Even though many groups participate in Shack-a-Thon not many participate in the events put on by Habitat, Goerlich said.
“Traditionally we would try to set up activities like tug-of-war, volleyball, four square or other games like that, but few people, if any, participate,” she said.
It was because of the lack of enthusiasm Goerlich decided to forgo the games and activities.
“I felt our energy would be better used if we focused on entertainment in the evening and keeping the event running smoothly,” she said.
Goerlich said one difference this year was that Psi Chi, the psychology club, had an all-you-can-eat dinner for $5. After the dinner students played root beer pong and flippy cup.
Entertainment started at 7 p.m. with musical performances from Cheryl Rodey, Joe Cutrone and On the Rocks. After the entertainment karaoke was open for all students to participate.
“I like how Habitat provided us with some sort of entertainment,” said junior elementary education major Claribel Rocha. “When people are watching others perform it makes it feel like we’re watching an outdoor show. The reality is we’re sitting outside in the cold under cardboard boxes.”
Rocha said while she had fun at Shack-a-Thon, she didn’t expect to be so cold.
“Just two weeks ago I camped outside for Maroon 5 tickets wearing just a Snuggie over my clothes,” she said. “In the past week the weather got significantly colder.”
While some students complained of the cold weather, Williams said he was happy about the temperature.
“I am kind of excited that this year the event went on with much cooler temperatures than in years past because it showed what homeless people deal with during the colder months,” he said.
Williams said he hopes knowing what homeless people go through will educate students.
“I think it really opens up people’s eyes to see the hardships homeless people go through on a daily basis,” Williams said. “Homeless people seem to have a negative stereotype surrounding them, but hopefully this event sheds more light on what they have to go through.”
More from NewsMore posts in News »