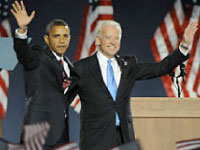 Josh Cox sat in front of his TV on Tuesday night eagerly anticipating the outcome of the history-making election.
“They called Pennsylvania for [Sen. Barack Obama] and I knew then that it was going to be tough to beat him because McCain basically put all his marbles there and then they called Ohio and I basically knew it was over,” the president of the College Democrats said.
Obama won the election on Tuesday with 349 electoral votes. The Democrats also gained control of the Senate and the House of Representatives.
Cox said he supported Obama because he liked his policies concerning health care, the economy and the War in Iraq.
“I supported Obama because I liked the prospects of something different,” he said. “I really saw [Sen.] John McCain as the angry old man he is.”
Cox said he’s glad a president is finally focusing on the middle class.
He also said he’s interested in seeing how Obama will change health care in the United States. He said he thinks Obama will be able to stop insurance companies from raising prices for people who may have a difficult time paying for health coverage.
Cox said he thinks the next four years will be exciting.
“I keep my fingers crossed that we’ll be able to get past the partisan divide,” he said. “I’m hoping that we’re going to be able to take policies and put them into place.”
Political science professor Craig Curtis said he thinks Obama was able to win because generated large voter turnout and secured the majority of votes of black people, Spanish-speakers and women.
He said Obama’s win reflects the idea “that American people were very fed up with George W. Bush and not just a little bit peeved, but really upset and unhappy.”
He said the result proves the Bradley effect is no longer valid. The Bradley effect is a theory proposing some voters tend to tell pollsters they will likely vote for a black candidate, but on election day, vote for his or her white opponent.
“The results that we had in those states were very close to the polls, and people weren’t getting into the voting booths and saying, ‘I can’t vote for an African-American,’ ” he said.
President of College Republicans Zephanie Custer said she didn’t support McCain during the primaries, but she supported him during the general election because she thought Obama didn’t have enough experience.
Custer said she thought Obama would win a few weeks ago because of the “momentum” of his campaign.
She said she thinks Obama doesn’t know what’s right for big businesses.
“I don’t think people realize that when you tax corporations that make over $250,000, those are stores you shop at so you are paying those taxes,” she said.
Senior management and administration major Matt Skas said Obama’s plan to tax big businesses is ineffective because it causes them to have to cut jobs.
“I think a lot of things are going to change … I don’t necessarily see them changing for the better,” he said.
He said he thinks Obama’s plan to make health care more affordable and accessible is a good idea in theory, but it will ultimately leave the country in more debt.
“I don’t think he’s going to do too well,” Skas said. “I think the [House of Representatives] and Senate is going to switch back in two years and I think the country is going to go back to being very conservative after seeing what Barack Obama has done.”
More from NewsMore posts in News »