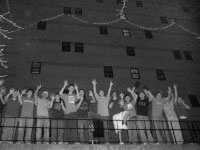 Residents of the seventh floor of Geisert Hall had a bright idea this past week just in time for the holiday season.
Feeling as though they were getting the short end of the holiday spirit stick, residents of Geisert seven, including sophomore civil engineering major Adam Moulton, decided to take the matter into their own hands.
“Many of us feel that Bradley hasn’t done enough to decorate for Christmas,” he said. “Instead of sitting around and just complaining, everyone on the seventh floor of Geisert decided to do something about it. We decided to spruce up the building’s exterior with Christmas lights.”
Originally, the idea of freshman industrial engineering major Andy Brown and junior electrical engineering major Dan Gorenz, the lighting was supposed to be a small thing between friends.
“A few of the guys on the floor began to decorate their rooms for Christmas, so we thought, ‘Why not decorate the whole floor?,’” Gorenz said.
At first, Gorenz and Brown only wanted to go from one room to the other, but those plans quickly changed.
“Once a few of the other guys on the floor got involved in the lighting of the rooms, we made bigger plans,” Gorenz said.
Rather than going at this alone or as a small group, all of Geisert seven, with the help of some residents of other floors and buildings, pooled their efforts to pull off this not-so-simple task of decorating the building.
“I’m not just talking about students putting up a few lights in their windows,” Moulton said. “We actually used a coordinated group effort to string many long strands of Christmas lights across the [exterior of] the seventh floor of Geisert.”
While stringing the first side of the building, the floor decided to make this a floor-bonding experience. Collecting money to buy more lights, the group decided they would need about six 90-foot strands.
However, once their resident adviser got involved, he decided that this would qualify as a floor activity, and they were reimbursed for their lighting purchases. Totaling between $50 and $60, the floor purchased just enough lights to make it work.
The task was not simple, as its process involved weighing down strands with shoes to add weight to swing the strands from window to window and multiple floors assisting in the raising of the lights around the corners.
“This project is more difficult than it may seem,” Moulton said. “We can’t just hand the lights off from window to window. The windows come in pairs and the next set is always a bit of a distance apart.”
Brown said the hardest part of the whole process was the corners.
“Getting those lights around the first corner posed as a huge problem, but once the first one was done, the rest got a lot easier,” he said.
By lowering a long Ethernet cable from the side of the building the lights were headed to, and duct taping the lights to the cord, the group was able to maneuver the corners more easily. With some help to ease the lights past the other six floors, the group found out a collective “swing” was the best solution.
“It really helped having a floor of engineering students,” Gorenz said. “Having a dozen guys who know how to problem solve was a plus.”
On Wednesday night, the group of about 15 students, after almost 10 hours of work over the course of three days, plugged the lights in – and they can be seen from quite a distance.
“A few of us guys went to Bacci’s the other night and we could easily see the lights from there,” Brown said. “A few Gorman’s patrons actually cheered when we were swinging the lights from the windows facing CampusTown. That was pretty cool.”
Besides being a good holiday floor program, the students of Geisert seven feel this is what the Bradley community should be more about.
“I think that when news of drinking tickets and busted parties gets to Peoria and the outside community, it gives a false view of college students,” Brown said. “Working together is why we are here at the Bradley community, and we are just trying to help the community in any way possible.”
More from NewsMore posts in News »