Students stay on their feet for the kids 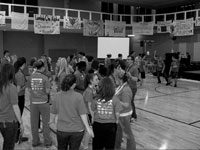 Students packed the Markin Family Student Recreation Center last weekend to dance the night and day away for a cause.

Since 2001, Bradley has hosted the annual fundraising event Dance Marathon, where students dance for 24 straight hours to raise money for the Children’s Hospital.

From 6 p.m. Friday to 6 p.m. Saturday, dancers enjoyed dance lessons and manicures in addition to performances by the Bradley a capella group On the Rocks, the improv team Barbeque Kitten, Orchesis and the ROWVA High School marching band.

Families of patients of the hospital were also invited to speak on Saturday.

“We have been a part of Dance Marathon at Bradley since 2002,” said Cindy Reynolds, mother of Children’s Hospital patient Steve Reynolds. “It’s the highlight of Steve’s year.”

Steve, now a high school student at ROWVA High School, was hit by a car at the age of seven. Doctors did not expect him to survive.

“The doctors said, ‘If he makes it, he’ll be a miracle,’ ” said Tim Reynolds, Steve’s father. “And here he is today, a miracle story.”

Amidst the student dancers were children much like Steve, who, because of a severe medical condition, were admitted to the Children’s Hospital. For some students, the presence of these children helped them to persevere.

“The Bradley Fellows prompted me to be a part of Dance Marathon,” freshman journalism major Deborah Oldenkamp said. “I came because it seemed fun, but I am staying for the kids. They make all of this worthwhile.”

Marcus Cole, freshman accounting major, said knowing where the money would go is what encouraged him to participate.

“I took a trip to the Children’s Hospital, and seeing those kids and what they had to go through really pushed me to take part in it,’ he said.

“I learned that no matter how tough it was, it was so completely worth every minute,” Jake Ewing, sophomore secondary education major said. “After listening to the families’ stories, it makes you realize how easy you have it. Standing for 24 hours is nothing compared to what some of these kids and families go through.”

For sophomore business management major Nicholas Foti, meeting the families made him realize what he took for granted.

“My favorite part of the night was listening to the families’ stories about their children,” he said. “No matter how tired I was or how much I didn’t want to dance anymore, those children in the hospital have suffered much worse than me.”

An announcement in the last half hour of the marathon reported that money raised in this year’s Dance Marathon totaled $23,844, more than doubling the initial goal of $10,000.

Nick Kinzel, junior political science major, said he thought that while the experience was tough, he left with a newfound respect for the families present and the Children’s Hospital.

“The chance to help these families is why this philanthropy exists,” he said. “Seeing where all the money we raised will go made a huge impact on me.”