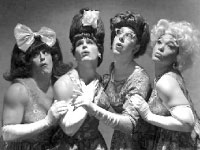 Alpha Psi Omega, Bradley’s honorary theatre fraternity, will host its annual Drag Show on Saturday to raise money for Central Illinois Friends and Family of People Living With AIDS.
The drag show has been Alpha Psi Omega’s largest philanthropic event, raising several thousand dollars for People Living With AIDS.
Alpha Psi Omega president Justine Palmisano said the event is something the theatre department looks forward to every year.
“We have a lot of fun in the work we do on a daily basis, but the drag show is something we can do completely for fun,” she said. “While we know the importance of our charity work with this event, this is something that gives us a chance to laugh at ourselves. It might not be a real show, but it’s something we put all our effort into.”
Working for just two and a half weeks, participants of the drag show work on choreographed numbers, which have been created by students who have been willed the choreographer positions by graduating seniors.
This year, sophomore theatre performance major Janice Gerlach and junior public relations major Carly Vadnais have worked as the lead choreographers, with help from senior theatre performance major Justin Verstraete, junior theatre performance major Drew Overcash and Bradley alumnus Devin Kelly.
“The position of choreographer is a pretty big deal to the students,” Palmisano said. “We don’t have a long time to learn these dances, mostly because a lot of our rehearsals are after school and our own rehearsals for shows. While we have some rehearsals around 6 p.m., we do a lot of rehearsing between 10 p.m. and midnight.”
While not your typical drag show, students lip sync to current music hits while dancing in the opposite gender’s clothing. Songs this year include Britney Spears’s “Womanizer,” Katy Perry’s “Hot N Cold” and even “I’ll Make a Man Out of You” from Disney’s “Mulan.”
“We did a ’90s theme last year, and had a really good response from the Bradley community,” Palmisano said. “We ended up raising more money than any Bradley drag show before us, and we were lucky enough to be able to hand [People Living With AIDS] a check for over a thousand dollars.”
Each year, some of the members from People Living With AIDS attend one of the performances put on by the students and have always been delighted to see such a fun charity event going to support their group.
People have expressed interest in offering any assistance to the college performers on any level. Even some of the theatre faculty have offered up their time and talents to participate in this philanthropic event.
“We have had people from all around who want to take part in our show in order to help our cause,” Palmisano said. “From past alums to community members willing to take part in the show, it’s great to see there is a  growing acceptance in our community. We keep this close to our heart and it really means a lot to all the students involved.”
Usually doing two shows in one night, this year Alpha Psi Omega has worked out the logistics in order to make a third midnight showing happen.
More from NewsMore posts in News »