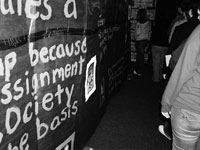 Students were gassed as if they were in Auschwitz, yelled at for not having green cards and listening to puking noises in the Michel Student Center Ballroom this week.

The Tunnel of Oppression offered students a chance to feel the power of hate and oppression through interactive experiences with volunteers, reading real life experiences of victims and viewing horrifying statistics.

The Tunnel represented themes like terrorism, the Holocaust, child abuse, rape, eating disorders and genocide. Each theme was represented by a portion of the Tunnel, an interactive skit with volunteers or both.

For instance, to represent the Holocaust, students were lead down railroad tracks into a room with the words “Arbeit Macht Frei” on a sign at the entrance to the room. Once inside the room, the volunteer conducting the tour informed the group that they were inside a gas chamber at Auschwitz. A fog machine was turned on to represent the gas.

Another section of the Tunnel featured stories and statistics about rape. One sign informed students that rape is four times more likely to occur to people between the ages of 16 and 24 than any other age group, while another said more than 32,000 pregnancies result from rape every year.

One of the most shocking parts of the Tunnel was the skit to represent immigration, according to a student who attended who wishes to remain anonymous.

“I was given a green card at the beginning of the tour, but they took it from me, ripped it up, yelled at me and then threw me in jail for answering a question they had asked me,” she said. “It was terrifying when they made us get on our knees, face a wall and listen to them while they screamed at us.”

After the tour was completed, students were brought into another room where they were informed a counselor was available to anyone who needed to talk if they felt uncomfortable or upset.

The group then asked questions and comment about the Tunnel. Words used by students to describe the experience included “horrifying,” “eye opening,” “upsetting” and “powerful.”

Many students also admitted they had been extremely shocked by some of the statistics they had seen during the tour.

“Going through the Tunnel of Oppression was definitely a learning experience,” she said. “It really opened my eyes in a lot of ways. What we do and say can really affect other people.”

“A lot of the things in the Tunnel were very shocking and informative,” she said. “I learned a lot. I think everyone should go through the Tunnel and experience it for themselves.”