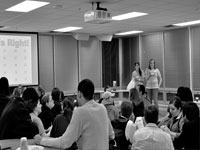 More than 100 students showed up in Lydia’s Lounge toting suitcases and hoping their names would be drawn for a getaway last weekend.

The annual Suitcase Social is an event where students pack a suitcase and enter their name into an all expenses paid raffle for a weekend trip to a destination in the continental U.S.

The location of the trip is kept secret until the very end of the night. After the raffle, the winner and one lucky friend leave from the social for the airport. The winners of this year’s Association of Residence Halls-sponsored event received a trip to Orlando, Fla.

Freshman business major Jessica Martinez’s name was drawn and she was busily trying to contact her mom to tell her she was going on a weekend trip to Florida.

“My mom still doesn’t believe me,” Martinez said. “She says I have to send her pictures.”

Freshman health science major Tim Ondrey accompanied Martinez, and he had better luck convincing his family he was headed to Florida for the weekend. He said his mom’s only concern was he wouldn’t get any of his work done for class.

The pair received tickets to Universal Studios as well as some extra spending money. ARH also arranged for the winners to stay at the Crowne Plaza Universal Hotel for the duration of the trip.

Martinez said she had been to Orlando before, but said she was thrilled to go back.

Masha Shapiro, one of the program coordinators for the event, said this is the sixth year for Suitcase Social.

The idea for the Florida trip came about because of the Nickelodeon theme for this year’s ARH staff, Shapiro said.

“We knew we wanted to send them to Florida,” said co-coordinator Katie Clemens.

She said she thought the trip to Universal Studios would be a good tie-in with the Nickelodeon theme.

After students deposited their suitcases and signed up for the raffle Friday night, there were plenty of fun suspense builders, such as trying to guess the exact temperature of the mystery location.

There were trivia questions about the state the winners would be going to, and correct answers were rewarded with prizes such as movies and candy.

There was also a smaller trip raffled off that sent two more friends leaving for Chicago. These winners received a Segway tour around the city.

Other locations ARH has sent people in the past include Atlanta and New York City.