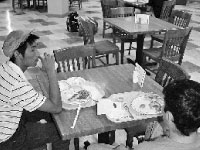 Sunday night dinners have been poorly attended this semester and may or not may not continue.
Attendance has dropped from more than 300 students attending last spring to around 140, Director of Food Services Ron Gibson said.
The dinner runs from 5 to 8 p.m. in the Michel Student Center teachers’ cafeteria, but Gibson said it is poorly attended after about 7 p.m.
“We’ve tried this out before and have never really had a good turnout,” he said. “I think it’s because people go away on weekends and don’t get back until much later. Participation in Saturday and Sunday night dinners has never been great.”
He said the ideal amount of students Food Services want would be around 20 percent of the 2,000 students with meal plan, roughly 400.
He said money is not being lost because of the lack of attendance, but Food Services is not making money either. He said he hopes to keep the dinners going because Student Senate requested them.
Sophomore actuarial science major Pam Goerlich said the dinners are inconvenient for her.
“I can’t attend the dinners because I have meetings that fall in between that time frame,” she said. “It’s a good idea in theory, I like having the option of a place open on weekends that will take meal plan because I don’t like having to use QuickCash so much or using real money. But if they’re not making much of a profit, I’d rather have the money go towards something else.”
Gibson said he thinks Student Senate and the Association of Residence Halls do a good job promoting the dinners in the residence halls. Senate made up the hours based on surveys they handed out last year.
Sophomore civil engineering major Andy Germanetti lives off campus but still uses meal plan and said he hasn’t heard much about the dinners.
“I didn’t even know about them, they should be better publicized,” he said. “It’s inconvenient for me because I don’t live on campus, but if I did it would be better because everything’s closer. Most people I know have cars and go out to eat on weekends.”
He said he would like to see the dinners keep going if they were publicized better but student polls should be taken to see if students really want to keep them.
“I think a change of hours would be good too,” Germanetti said. “We need a place open late because everyone eats at different times, and some people get the munchies late at night.”
Gibson said he is not sure if the dinners will continue.
“During Thanksgiving Break, we will sit down with Student Senate, the Student Activities Office and [Business Manager] Ken Goldin to determine whether or not to continue [the dinners],” he said.
More from NewsMore posts in News »