By Scout on April 23, 2010
Pink came to life Thursday morning at Meinen Field. 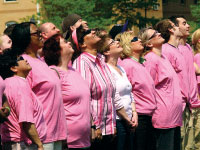 More than 350 members of the Bradley and Peoria communities came together to capture an aerial photo of the Susan G. Komen Race for the Cure ribbon.
Organizers were aiming to get 250 people to create the human ribbon. But because the turnout was so large, an additional picture was taken.
“It was definitely a success because we ran out of T-shirts,” said Jim Crone, director of web/marketing communications. “Komen only donated 300 t-shirts because the goal was to have 250 students show up.”
A few parking spaces in the St. James Apartment Complex were blocked off in order for photographers to use the basket on a Peoria Fire Department ladder truck to take the picture.
Karen Metzinger, the director of alumni publications and head of Team Bradley, said the living ribbon was proof that people coming together can accomplish anything.
“The human ribbon was a colorful, creative example of how a community can join together to form a “human ribbon” tea
m,” she said.
The entire campus, from student up through administration, came together to create the ribbon.
“We took Komen’s logo and gave it to the Bradley facilities who mapped it out and then we took the blueprint and outlined it in the field,” Crone said.
The originally idea for the ribbon came from Eric Brinker, Komen’s nephew and co-chair of this year’s Race for the Cure. He found an example taken somewhere else and presented the opportunity to Team Bradley.
Besides pink T-shirts given to the first 300 people, participants also received a 10 percent-off coupon for Bradley logo purchases at the Bradley Bookstore.
Plus, those in attendance got free food courtesy of Nick and Willy’s Pizza, Jimmy John’s and the Fieldhouse.
In addition to the free food, there was also a bags tournament led by Regi Mele, Sydney Johnson and Robert Woodson. The price to participate was $2 per person or $4 per team. All proceeds went towards Team Bradley.
“We had to choose a company or organization for our COM 219 class,” Mele said. “We decided to choose Susan G. Komen because we wanted to raise awareness and money for it. We thought of bags as an activity because we knew there was going to be a lot of college students and it’s also an easy thing to do.”
Johnson said he was surprised at how big the event turned out. It originated as a mock campaign for the class, but the group decided to actually carry out the plans.
Some student were undoubtedly there to take advantage of the good food and fun times, but for others, there was a more personal note.
“My grandma went through it and survived,” said Ashley Vodraska, junior early childhood education major. “I wanted to come out and help support breast cancer awareness.”
Nana Madanat, senior public relations major, said while having more shirts would be good for the future, the event was overall a good one.
The event was also a great draw for Peoria’s Race for the Cure, which Team Bradley is a large part of. About 200 people registered for the race following the photo shoot.
“I truly hope the event was a BU community builder that brought greater awareness of the importance of finding a cure for breast cancer,” Metzinger said. “I also hope the experience of being a part of the historic photo made a warm Bradley memory for everyone who took the time out of their day to show their support for the cure.”
More from NewsMore posts in News »