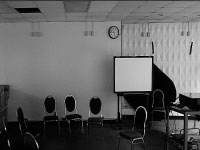 As Bradley’s theatre department changes and expands, so does its need for space.
As a result, the old work out room in Heitz Hall has been temporarily turned into a classroom and lab space for theater students.
“For the past five years, the Department of Theatre Arts and the Interactive Media program have been collaborating on a wide range of projects that have earned a great deal of national and international attention in addition to winning several significant awards,” George Brown, chair of the department of theatre arts said. “These intermedial projects are extremely resource-intensive in terms of time, personnel and space.”
Traditionally, theatre productions take approximately six weeks to develop while dozens of faculty and students work in scene and costume shops for four hours a day, five days a week. Rehearsal takes place during that same time period for another four hours a day, six days a week.
In total, the amount of time students spend working or rehearsing in these six weeks is equal to taking three traditional three credit hour courses over the length of an entire semester.
However, intermedial productions blend live performance and interactive media, and take more than a year to develop because of the extensive resource requirements.
“This space was given to us unequipped and with no funding – we are on our own to make this work,” Brown said. “We are using the award money from the Burgess award we won last year to make the space work.”
The extra space in Heitz has been assigned to the theatre department for only a year, but Brown said he is still desperate for more space and could find many more uses to support his department and interdisciplinary projects if allowed to keep it for a longer period of time.
Currently, the 900 square foot room is being used to create these intermedial productions. The room is being used by two classes to develop four to six different productions, including Christmas Carol, two pieces based on the poetry of Kevin Stein, Theatre Seven, a piece for the Lincoln Memorial and the Soldier’s Tale, which will be done with the Heartland Symphony.
“Facility needs are critical in the Hartmann Center. The department has been making requests for additional and improved space for multiple years,” Brown said. “We are extremely grateful for the support we have received and know the space, which we are calling the Intermedia Center, will be put to good use.”
More from NewsMore posts in News »