There is more to campus art than meets the eye 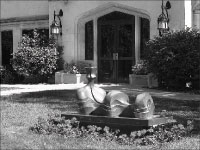 Peppered across campus, sculptures at Bradley tend to be taken for granted by students on a day-to-day basis, but the grounds crew works to keep the art preserved.
What some students seem to forget is these sculptures don’t just exist. There is so much more that goes into the sculptures than just to make the campus aesthetically pleasing.
“No one really stops to look at the sculptures,” junior theatre performance major Ben Scarbrough said. “They’re kind of like background noise.”
Bradley has more than 10 different sculptures around campus. However, many people don’t know where they are located, let alone who created them.
“I could name two, maybe three of them,” Scarbrough said. “Most people don’t know which buildings are which, let alone the sculptures.” 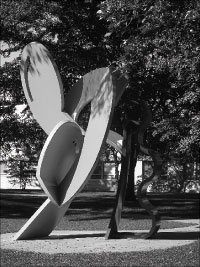 Whether or not you know the colorful one in front of Baker Hall is called the “Soybean” or Lydia Moss Bradley is considered by campus officials as a sculpture, most people don’t realize the work that goes into these sculptures after they are in place.
Grounds Supervisor Stan Glazier and his crew are in charge of maintaining the sculptures around campus.
“We try to clean them twice a year – once in the spring and once in the late fall,” said Glazier. “Sometimes we have to do some touchups throughout the year.”
Cleaning the sculptures includes everything from keeping up the paint jobs on some to buffing up tarnished metal to making sure the metalwork is maintained.
“We have to check on the welds on the sculpture in front of the library rather than keep up the paint, as it is all sealed,” Glazier said. “We even give Lydia a good buff with some Carnauba wax every once and awhile.”
However, Glazier is not alone in his endeavors. Working with the Art Department, some student artists maintain the sculptures around Heuser Hall.
Junior graphic design major Dan Colgan said for students, the sculptures should have a resounding purpose.
“These sculptures serve to inspire students and to spark creativity in their every day pursuit as an artist,” he said. “We need to keep them up.”
Along with that help, some of the original artists still come in under a contract and maintain their sculptures.
Glazier said sculptor Nita Sunderland, who created “Reclining Woman” in front of the Hartmann Center and “Birds of Prey” near the admissions office, comes in do maintenance on her work.
Colgan said the sculptures help to distinguish Bradley, having such a unique aspect to campus attraction.
“The sculptures become familiar to potential freshmen during college visits,” Colgan said. “We all remember the sculpture that spells out Bradley by observing it from different viewpoints.”
Glazier said the sculptures emphasize the pride Bradley has in cultural diversity.
“I really think it brings diversity and it shows that we stress our Art Department,” he said. “Its just another cultural issue that we take part in. With the number of sculptures that we have here, we are quite a bit ahead of some of the other bigger campuses out there.”
Concrete pads have been added in front of a few campus buildings in hopes that new and rotating sculptures can come to campus, Glazier said.
Scarbrough said he thinks student artwork would be a great addition to the campus feel.
“Why guest sculptures? Why not students’ sculptures? That would be a vast improvement,” he said.
Scarbrough said the arts are important, but student work would help improve Bradley’s identity.
“As it stands now, Bradley kind of floats in an unknown identity, an amalgamation of the identities one could find on campus,” he said.
Some artwork, including the newly added sculpture behind the Michel Student Center, include student contributions. That piece happened to be a co-op venture with another school.
“I think there are some new sculptures on their way in,” Glazier said. “We may see in the next year or so a few new sculptures start to pop up and really make our campus welcoming.”
More from NewsMore posts in News »