Top student-friendly places to pass the time in Peoria

The Scout collectively developed a list of destinations in Peoria that we feel are the least recognized but should be visited by Bradley students.

Sadly, due to financial issues, the theater is closing its doors after this weekend. But that doesn’t mean it won’t go out with a bang. Peoria Theater is the only place in Peoria to see indie films and non-mainstream films and is one of the few theaters in the countries dedicated to this genre. Tomorrow, they will host free movies, mostly horror, $1 to $2 drink specials and will be selling movie posters for $1. Take the chance to experience this one-of-a-kind movie theater while it lasts.

Read Voice’s story about the theater on V1.

This hole-in-the-wall diner, only ten minutes from campus, serves breakfast all day, and they don’t take it lightly. The small diner is easy to miss on the road, but has a subtle charm and a hometown feel that makes you feel like you’ve stepped into a diner of old friends. From muffins to hamburgers, the Hungry Moose has a large selection to choose from. Be sure to go hungry, the portions are large.

Downtown Peoria, and right next to Kelleher’s Irish Pub is this small brewery filled with character. They call themselves a craft brewery because they brew their own beer and offer different selections daily. One added bonus to visiting Rhodell’s is that you even have an opportunity to brew your own beer and take it home. 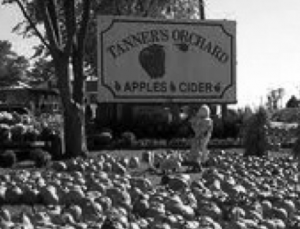 740 State Route 40, Speer, IL
For those of you who are newcomers to campus, Tanner’s is a great way to spend a fall afternoon. The orchard is home to a goat petting zoo, a market full of Trader Joe’s-esque products and a bakery where they sell their delicious apple cider and apple cider doughnuts along with the traditional caramel apples.

The orchard itself has a surplus of apple trees available for picking your own apples. This Saturday, as part of the American as Apple Pie Festival Weekend, Tanner’s will be giving away a free apple pie every hour. Only a short drive away, Tanner’s is a perfect fall activity to spend with new and old friends.

Although it may not look like much from the outside, Peoria natives rave about this restaurant. This non-chain pizzeria serves up a great thin crust pizza, and the owners are friendly.

Little do Bradley Students know, Peoria has astronomical history. About twenty minutes from campus stands Northmoor Observatory, the home to a large telescope. The telescope was made in 1913 for the Illinois Watch Company in Springfield. it was never used to look at the stars. Instead it was used to coordinate the proper time in the clocks they were making.

Eventually it was purchased by Bradley and was later “re-discovered” under the bleachers of the Bradley Fieldhouse. It was then re-assembled by the park district at the Leo Donovan Golf Course, where it still stands today.

Now through the end of October, this observatory is open to the public every cloudless Saturday night from sunset to midnight. Volunteers will be on hand to help you see through the telescope so you can find planets and cosmos. If you are interested in stars this telescope is definitely worth the trip.