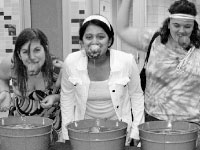 Student Body President Jordan Ticaric said more than 800 students attended last Friday’s Late Night BU.
That number was 300 more than Student Activities Director Michelle Whited had previously predicted.
“Late Night BU gives students an option besides going out,” Ticaric said. “Students are going to realize there are alternatives for fun that don’t get you into trouble.”
Students played in a Guitar Hero competition, painted pumpkins, competed in a costume contest and enjoyed free food courtesy of the event’s sponsor, Alexander’s Steakhouse, in the Markin Family Student Recreation Center.
Freshman engineering major Erin Westerby said she thought the event went well, and the activities, while crowded, were fun.
“I enjoyed Late Night. I thought it was a good idea,” she said. “The lines were really long, but I guess that’s a good thing. It means a lot of people showed up. I didn’t do any of the activities because the lines were too long, but my roommate made picture frames and painted pumpkins.”
From tarot card and palm readings to a showing of the “Rocky Horror Picture Show,” the night was packed with activities. 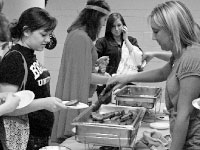 “The goal was to have everything people might be doing on a Halloween night and put it all here in one place,” Late Night  BU volunteer Nausheen Farishta said.
Farishta said attendance was high.
“The turnout was even better than we had expected,” she said. “I feel like it’s because there is something for everyone.”
This was the first Late Night BU event of seven scheduled throughout the rest of the year. Late Night BU is spearheaded by the Wellness Center and Student Activities Office and is a part of the Comprehensive Alcohol Action Plan released in April by University President Joanne Glasser.
Many of the students said they agreed the event provided a fun option.
“It’s nice that students who don’t want to go out and party don’t have to sit at home,” freshman AEP major Tricia Anklan said.
Freshman criminal justice major Michelle Frye said she agreed.
“This seems like a good alternative to drinking,” she said.
Not all students agreed the program will deter underage drinking.
“I think the kids that were going to go out will still go out,” freshman mechanical engineering major Chris Ross said.
Freshman electrical engineering major Peter Burrmann said he agreed.
“I just think it’s hard for people to break the habit of going out and drinking,” Burrmann said.
Ticaric said besides creating an alcohol-free activity for students, Late Night BU has additional benefits for the university.
“It gives students a chance to see everything that the Markin Center has to offer,” she said. “We are also utilizing student groups. Getting involved [with Late Night BU is a great way for organizations to get more publicity.”
Frye said she enjoyed the program.
“It’s obvious they put a lot into this,” she said. “If they keep having different themes, it will be cool. I would definitely come back.”
The next Late Night BU event is scheduled for November 22.
More from NewsMore posts in News »