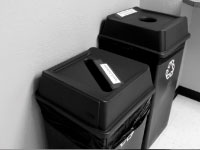 Student organizations on campus have joined together in an effort to give Bradley’s recycling program a new look.
Student Senate, Student Environmental Action Coalition and the Student Green Elections campaign have been working together this semester to place more recycling bins in residence halls.
Recently 20 new bins were placed in University Hall as a test to see if students would use them efficiently.
U-Hall was chosen because it is an all-freshman residence hall, and its residents are less likely to have a bias toward past campus recycling efforts,  said Vice President for Business Affairs Gary Anna.
“It has definitely been a joint effort,” said Student Body Vice President Tricia Anklan. “The concern was there, and we have been meeting weekly with Gary Anna, the vice president for Business Affairs.”
U-Hall is the first residential building to receive a recycling face lift. Two new bins have been placed in all wings of the building, both A and B sides, and in the common areas on the first floor. In addition to plastics and paper, students are also able to recycle cardboard in the same bins.
Freshman elementary education major Colleen Ruopp is a resident of U-Hall. She said she thinks the new recycling bins are a great idea.
“I really think the bins are great and think the program is going to go well,” she said. “Before on my floor we used to set out cardboard boxes for plastic bottles. It’s nice now that we have somewhere on our floor to put our recyclables and we know they will be recycled.”
Ruopp said the reason many residents in U-Hall didn’t recycle before was because it wasn’t easy for them.
“No one is going to take the elevator down to throw away a water bottle,” she said.
Throughout campus, student employees empty the recycling bins in residence halls and are emptied when the students have time, not necessarily on a scheduled basis, Anklan said.
But along with the new bins comes a new system. Now in U-Hall the custodial staff will empty the bins every day. The bins are small and modern looking with a clear top and solid blue bottom. Because of their small size, they are easier to clean and empty.
“The logistics of not having students do it is that when you get into finals the last thing you want to worry about is who is emptying a recycling bin on your floor,” Anna said. “If there’s a problem on a floor, we know who’s supposed to be taking care of it.”
Freshman elementary education major Danielle Kniep said she likes the  new program but has already had problems with the bins.
“I’m not sure when they are supposed to empty the bins, but our floor’s bins were definitely filled today,” she said. “Today I tried to stuff a water bottle into the bin and the lid popped off.”
Anna said if the program works it will be expanded, but the university is being cautious to make sure bins aren’t wasted.
“It’s not like the other buildings are being left out, we want to be careful about that because if we go out and buy 1,000 recycling bins and the program doesn’t work they’ll just be like the other tubs we’ve accumulated. We don’t want that to be the case.”
More from NewsMore posts in News »