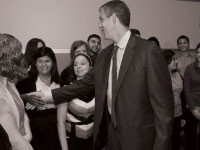 The United States Secretary of Education wanted to come to Bradley when he was in high school.
“I really wanted to play basketball here,” Arne Duncan said to a packed Civic Center ballroom Wednesday morning. “I even finagled an interview with an assistant coach, but he kept asking ‘who are you again?’ and ‘what school do you go to?’ … I think my mind was bigger than my ability.”
The former Chicago Public Schools CEO was in Peoria for an education symposium sponsored by Bradley’s Institute for Principled Leadership in Public Service among others. He was the keynote speaker at the event that brought about 20 superintendent, hoards of teachers and a number of civic leaders from across the state together. After his speech, a roundtable with various education leaders discussed issues facing urban education.
Introducing the secretary was senior elementary education major Marcus Belin.
“It was such an unreal experience,” he said after the event. “I was very excited and honored to have that opportunity. Most people that know me know that I want to be the secretary of education. That is my ultimate goal in life. To be able to introduce him and even tell him that I want his job seemed like it got a foot in the door for me.”
When it was Duncan’s turn to speak, he focused on reform – not in a few years, but now.
“One point two million kids are leaving our schools for our streets every year,” he said. “Our goal is not to maintain the status quo because the status quo isn’t good enough.”
Lucky for students in this country, education is about the one thing not being bickered about across the aisle in Washington, D.C.
“Around education, Republicans, Democrats, they’re all coming together,” he said. “No one is defending the status quo.”
Also alarming is the rate at which kids in the U.S. are falling behind those in other countries like China and India.
“We have to stop playing catch up in education,” Duncan said. “By 2020, we need to be leading the U.S. in college graduations. Why shouldn’t we have the most educated workforce in the world? We used to have it.”
That’s why Duncan said he’s alarmed by cities and states that are looking at cutting school weeks to four days. A law that would have allowed school districts in Illinois to go to four-day weeks was passed by the state House recently, but was defeated by a Senate committee Wednesday.
The latest obstacle facing education in the United States is the loads of teachers facing layoffs before next fall. Those losing their jobs would number as high as 300,000, Duncan said.
“We’re fighting to stop these massive layoffs,” he said. “We know school districts aren’t cutting to the fat, they’re cutting to the bone.”
More from NewsMore posts in News »