University hosts galas across the country 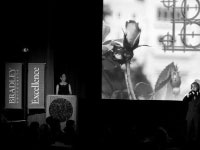 Bradley is in the wake of a renaissance.
A development known as The Campaign for a Bradley Renaissance has been in motion since April 2008, and has raised over $120 million.
This summer, Renaissance Galas were hosted in major cities such as Washington, D.C., St. Louis, Chicago and Los Angeles.
The goal for the campaign is to raise a total of $150 million to put toward the vast improvement and expansion of Bradley. Some of these renovations include an engineering and business convergence center, an alumni center, an Athletic Performance Arena to house women’s basketball and volleyball as well as concerts, an improved men’s basketball practice facility and greater aid in academic excellence.
In an effort to meet the $150 million benchmark, Bradley has set up Renaissance Galas around the country to inform supporters and alumni of the improvements being made and how their philanthropic donations could help.
“It was important for us to visit geographical areas where we have alumni and friends who have enthusiastically supported our efforts over the years,” said Pat Vickerman, vice president for advancement. “We need Bradley donors from coast to coast to help us exceed our campaign goals.”
The galas include appearances by University President Joanne Glasser, the cabinet, deans, and faculty, as well as the jazz band, members of the speech team and others to make the night memorable.
“The Renaissance Galas were so elegant and refined,” said senior speech team member Amanda Voirol. “They made me feel proud and honored to be a small part of Bradley University’s legacy.”
Student vocalist Tom Carreras said he felt the gala strengthened his pride as a Bradley student.
“I had no idea what to expect from the event, but I came away with more school spirit than I could have ever expected at all,” he said. “I was honored to be a part of the event, and was also incredibly glad I got to learn about all the awesome things that are about to happen to my school.”
Preparation for these dinners was a huge collaborative effort involving aid from several campus entities ranging from Information Resources and Technology to the Slane College of Communication and Fine Arts.
“The purpose of these galas,” Vickerman said, “was to celebrate the exciting progress of the Renaissance campaign, present the campaign priorities and inspire alumni and friends to join the thousands of donors who have already made a campaign commitment.”
Although the response to these galas was exceptional, there are no plans set for future receptions.
However, Vickerman said Glasser will be visiting several more cities, including Chicago, Indianapolis, Philadelphia, New York and Las Vegas to meet with alumni throughout the upcoming year.
Vickerman also said because of  the contributions of numerous estates, corporations and individuals, Bradley is well on its way to reaching the $150 million goal.
More from NewsMore posts in News »