Unofficial St. Patrick’s Day at U of I begins today 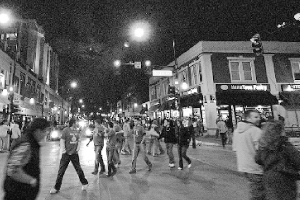 Today, many student will begin celebrating Unofficial St. Patrick’s Day at University of Illinois Urbana-Champaign, and many Bradley students will join them.
“A lot of people come up from Southern Illinois University, Illinois State, Bradley and a bunch of places,” freshman U of I student Jacob Stukenburg said. “Most people here on campus are really excited for it.”
University of Illinois Assistant Chief of Police Jeff Christensen said a significant number of out-of-town students visit U of I this time of year.
“I do not know the exact figure, but the majority of people here this weekend for Unofficial will be from out of town,” he said.
Junior international studies and French major Manny Lopez said he went to U of I for Unofficial last year.
“The whole campus is a big party,” he said. “It’s a great place to meet new people and everybody’s friendly.”
However, Christensen said U of I police do not share students’ enthusiasm about the event.
“We by no way sponsor or condone this event,” he said. “This event is mainly centered around alcohol and underage drinking.”
Stukenburg said the event does tend to focus significantly on alcohol.
“I have heard stories about people during Unofficial just sitting out on the quad with a keg drinking,” he said. “Some people start drinking as soon as they wake up in the morning.”
Christensen said the event has its roots in the bars around campus.
“Unofficial started in 1996 as a marketing effort by some of the bar owners,” he said. “Since then it has grown significantly.”
The problems caused by Unofficial tend to make their way into the classroom as well as outside of it, Christensen said.
“We usually have people causing disturbances in classrooms because they are intoxicated,” he said. “Drinking tickets range anywhere from $155 to $300, with $300 being the amount for underage drinking and the use of fake identification.”
Although the maximum $300 fine for underage drinking at U of I is lower than Peoria’s $375 fine, Christensen said both U of I and the school the offender is from could fine the offender.
“If a ticket is issued, our discipline office will contact their discipline office and inform them of the offense,” he said. “It is possible that an additional fine will be issued depending on the policy of the school the offender is from.”
Executive Director for the Center of Residential Living and Leadership Nathan Thomas said U of I officials have contacted Bradley in the past, and students can and be assessed the Bradley fine of $150 for underage drinking.
Stukenburg said despite the abundance of alcohol, he still feels safe on campus during Unofficial celebrations.
“It’s for the most part harmless drunk people,” he said. “Staying safe is no different this weekend than any other, just walk with your friends at night.”
Christensen said policing all the extra students at the university for Unofficial celebrations has a significant cost.
“The extra money we spend on this is ludicrous,” he said. “Between Urbana police, Champaign police, state police and the University police this weekend costs about $20,000 extra to patrol.”
Christensen said the most important thing for visiting students to keep in mind is safety.
“Visiting students should be responsible, safe and respect our campus,” he said.
More from NewsMore posts in News »