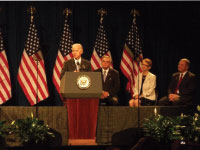 Joe Biden is well known for his gaffes and joking demeanor.
But the vice president’s speech at the annual Partners in Peace awards banquet was anything but joking. Well, mostly.
Biden was the keynote speaker at the annual fundraiser for the Center for Prevention of Abuse, which provides assistance to people in abusive households and victims of rape.
In 1994, as a senator from Delaware, Biden was instrumental in the passage of the Violence Against Women Act, which is considered a landmark bill, creating sweeping changes to the rights of rape and domestic abuse victims.
But the work’s not done yet.
“Folks, this is a big problem,” he said to the 1,100 or so guests packed in the Civic Center ballroom. “A lot of progress has been made,  but there’s still a lot to do. When you look at all the unmet need out there (it’s obvious).”
The progress that has been made, however, is significant.
“In Delaware (prior to) 1994, a man couldn’t be convicted of first degree rape if his victim knew him,” Biden said. “Those were the kinds of laws we were working with.”
More recently, domestic abuse was considered a pre-existing condition for health insurance in several states because women in previously abused houses are more likely to be in future abusive relationships, thus costing insurance companies more money.
“But no more, no more,” Biden said, citing the recent passage of health care reform, which eliminated the disqualification of people for pre-existing conditions.
One hurdle the then-senator found when trying to pass the bill was that men simply couldn’t understand why women wouldn’t leave an abusive situation.
“It’s like bullies on the school playground,” Biden said. “Your parents said all you have to do is pop them in the nose, they’ll bleed and leave you alone. But how many of you bad ass guys out there did that? None that I know.”
Biden went on to speak about the deep-seeded cultural problems that cloud victims of rape and domestic abuse.
“How easy do you think it is for a woman to go home and say I’ve been raped … only to have someone ask what they were doing wrong,” he said. “Do you know how hard it is for a woman to … call a [rape assistance] hotline? Do you know how much courage that takes?”
The vice president left the audience with this message: “No man, no man, no man under any circumstance but self defense, has a right to raise his hand to a woman. There’s no conditions. Zero.”
University President Joanne Glasser attended the speech and said she was impressed by Biden’s passion for the topic.
“I thought the speech was incredible,” she said. “It was inspiring, it was very personal and it was clear it had a lot of personal history for him.”
More from NewsMore posts in News »