Wall on quad falls to symbolize end of stereotypes 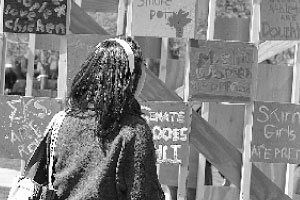 Students painted bricks about race, gender, greek life during the week to be hung on Wall of Stereotypes on Olin Quad
Ronald Reagan’s famous words “Tear down this wall!” seemed to ring in the heads of students looking on the annual Student Senate “Wall of Stereotypes.”
Built on Olin Quad, this year’s wall was a box with stereotypes covering all sides of it.
Earlier in the week, students had the chance to decorate wooden squares with stereotypes about things such as gender, race and greek life.
Senior public relations major Rachel Strack said she thinks the wall is a good idea.
“But it needs to be promoted more, because I was not incredibly aware of when it was going on or when I could make a brick for the wall,” she said. “The wall is incredibly important because it helps us to separate what is true and what is untrue. As college students, we tend to think we have the right view on people and the world, so putting this up gives us the opportunity to step back and realize just where we are lacking in the respect department.”
About five years ago, the wall was started by Senate to raise awareness of the stereotypes found on campus.
Student Body President Jordan Ticaric said Senate brought it to campus for the message it offers to college students.
“We did it to acknowledge the diversity on campus and to be more conscious of what we are saying about each other,” Ticaric said. “We need to realize that things we say in passing could be very offensive to others.”
This year, as in past years, senate paired up with a construction company to help build the wall on Olin Quad. Giving students the opportunity to paint a brick for free in the Michel Student Center this week, stereotypes about all kinds of people soon peppered the wall’s frame.
“We talked to a lot of student groups on campus to get their help in creating this wall,” Ticaric said. “Getting students from all areas was the biggest focus because each person has something they say that may not seem offensive in their group but could be to others.”
As students made their unique wall boards, members of the wall committee took them and placed them on the frame of the wall.
On Thursday, students and faculty came together to break down the wall, crushing the stereotypes with a sledgehammer.
Ticaric said the symbolic way in which the wall is torn down is a powerful way to get across the point the wall makes on campus.
“I think that words are how our generation communicates. We are constantly saying things that we might not think about, and this makes us look at what we are saying,” she said. “It’s easier to talk about it and knock it down than live with it building up inside you.”
More from NewsMore posts in News »