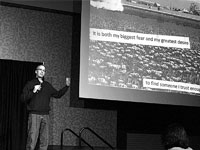 Frank Warren wants you to be careful: if you’re like him, you may begin envisioning Clip Art characters without their underwear.

The PostSecret founder visited campus Tuesday. Among the secrets on postcards he shared, was one from a stranger who said he or she worked with uptight, religious people, so not wearing underwear was the best way to make him or herself chuckle throughout the workday. Coupled near the words was an image of Clip Art business executives.

However, not all the postcards evoked laughs. Many were about depression, addiction, war and suicide.

“In some ways, I feel like suicide is America’s secret. In this short time that I have been here,” Warren said about halfway through his speech, “two Americans have been murdered, but four have committed suicide.”

PostSecret is an ongoing community art project where Warren, the sole founder, invites everyone to decorate a postcard with a secret and mail it to his home address.

“This postcard could be the only time in their lives they ever get that secret out, and I think that’s tragic,” Warren said. “Free your secrets and become who you are.”

In five years, nearly 500,000 people have sent postcards, and nearly 300 million people have visited the site postsecret.com, which is home to the postcards Warren chooses to publish. He has also compiled images of the postcards into four books.

One of the postcards said one word: confession. The word was written on a photo of a woman plucking hair from her nipple.

Although Warren didn’t reveal why he started PostSecret, he mentioned that his parents divorced, he was homeless, he watched one friend fall to his death and another committed suicide.

“That’s made me have patience with the world and patience with myself, and reminds me there is hope,” he said. “What I show on the Web site every Sunday isn’t a representative sampling of what I get – a lot of them are heavy secrets.”

Warren also discussed his work with HopeLine, a suicide prevention hotline. He said it was about to go bankrupt, but when he posted its need for help on the PostSecret Web site, visitors donated more than $30,000 and saved it.

He also said that when the All-American Rejects requested to use the postcards for their music video “Dirty Little Secret,” he turned down their offer to pay him personally, and requested they double the offer and donate the money toward HopeLine.

After Warren’s lecture, he opened up the floor for students to share their secrets. Many did, and the topics ranged from suicide to alcoholism to making up a fake ghost story on campus.

“Every one of us has at least one secret that would just break your heart, if you only knew what it was,” Warren said. “I’ve been doing all the talking, but I truly believe the power and the poignancy of PostSecret comes from you, the audience.”