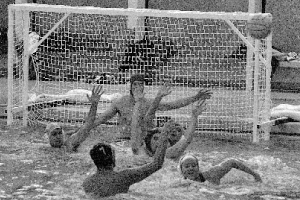 The club water polo team may not have won its first game last weekend, but founder Dominic Lyles said the experience was worth the 16-4 defeat.
The team squared off against Lindenwood University St. Louis, a three-time Div. III national championship team, in three scrimmages and one game.
“They brought up a small squad of select players to play us and help target our weaknesses,” Lyles said. “We obviously didn’t expect to win. It was more of an opportunity to work with other players. We learned a lot and had a good time with the Lindenwood players.”
He said the team did well, and he is happy with how they played.
“Our practicing paid off, and we worked well together,” he said.
Bradley’s team was formed when the Markin Family Student Recreation Center opened, and Lyles said it is still in the process of getting things together.
“As a first-year team it has been hard securing the equipment we needed to play,” he said. “Up until a few weeks ago we were using a goal made from PVC piping, which ended up breaking a lot. A commercially produced set of goals cost four grand and we were unable to raise that amount. A parent of a player stepped up and had two goals constructed at his company shop.”
The team has another game scheduled against Lindenwood in April and hopes to schedule more games against schools such as Illinois Wesleyan University, Illinois State University, Monmouth College and Knox College.
The team also hopes to host an inner-tube water polo game during an upcoming Late Night BU.
The team is also still looking for more players, and Lyles said no experience is necessary to join.
“It’s easy to start playing water polo, and it’s a great workout,” he said. “It gives you a chance to forget about the pressures of school for a while. The social aspects of belonging to a team are great, too. You get to meet students from all different majors and class years.”
The team practices Saturdays and Thursdays for an hour and a half and is co-ed.
Students interested in joining can get more information and look for updates on the team’s Facebook group, “Bradley Club Water Polo.”
More from NewsMore posts in News »