Where we were: Former Bradley students and staff reflect on 9/11 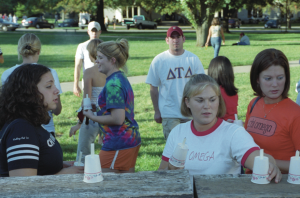 Ten years later, and most Americans can still answer that question with striking clarity.

For then juniors Ted Burger and Reggie Bustinza, they were students at Bradley, preparing to begin the day as if it were any other Tuesday.

“My roommates and I were in our off-campus house watching the news after the plane hit,” Burger said. “The image was of smoke and fire, so we didn’t think much of it.”

By the time he arrived at his political science class in Bradley Hall, Burger said he knew something more had happened.

“The professor was a bit late because he had been watching the news,” he said. “He reported what was happening, and it was the most bizarre experience. We were all in shock and didn’t really know how to feel.”

Burger, who was the Student Body Vice President at the time, said campus was eerily quiet that day.

“At school we were all kind of disconnected because we spent so much time focused on our studies and social events,” he said. “The Bradley bubble was shattered and it was surreal to see everyone so connected to current events.”

As the story continued to develop, Burger said students reacted to the uncertainty in different ways.

“A lot of people panicked,” he said. “I remember going to a nearby gas station and there were five or six cars waiting in line, and the fuel prices were skyrocketing. Everyone was also heading out to the grocery stores.”

Burger said the atmosphere on campus was somber.

“Everyone knew someone affected by it there,” he said. “All the classes let out early or were shortened. And everyone was just in shock, we didn’t understand what had just happened.”

Reggie Bustinza, now the Associate Director of Alumni Relations at Bradley, said normal daily activities halted once the gravity of the situation sank in.

“I remember it being a really nice day,” he said. “But a lot of people stayed in to watch the news. People skipped class, they weren’t out on the quad, they weren’t playing basketball, none of that.”

At one point, Bustinza said he recalls looking up at the sky and seeing Air Force One flying above Peoria.

“I turned on the radio and heard them talking about it,” he said. “I noticed there weren’t any other planes in the sky, either. They shut down all the air space.”

Former Bradley University police officer Andrew Myers was not on campus the day of the attacks; he was working as an executive administrative assistant in the Pentagon.

“It started as such an awesome day,” Myers said. “The sun was

out, it was going to be hot, but it was just a really nice day.”

Myers said he parked his car, poured some coffee and went to his office, where he heard about the first of the planes crashing into the Twin Towers.

“I brushed it off and kept working,” he said.

But as news reports showed coverage of the second New York plane crash, Myers said he knew something was wrong.

“My mother called to check and see if I was alright, and I assured her I was fine. Literally seconds after I hung up the phone, a fireball blew out the window,” he said.

Before leaving his office, Myers shut down his computer to protect any confidential information, grabbed his keys, and made his way to the smoke-infested hallway.

“If I had been using my head, I could have been out of there in 30 seconds,” he said. “But I just started following everyone else. There were 25,000 people in the Pentagon. It took me 20 to 40 minutes to make it outside.”

Myers said one thought played over and over in his head; “I’m not going to make it out of here.”

“I prayed I could make it out to see my daughter again. She was nine months old at the time,” he said. “Once I got out of there, I saw that there was smoke everywhere. People were badly burned, some alive, some dead.”

Shortly after exiting the Pentagon, Myers, trained as a military combat lifesaver, headed back into the building to help.

“It hadn’t collapsed yet,” he said. “At the time I was scared to death, but at the same time it didn’t really register.”

For hours Myers and his coworkers were unable to get through on their cell phones.

“My wife thought I was dead, my parents thought the worst,” he said.

After hours in the heat and sun, Myers left to return home.

“The parking lot was filled with brand new computers,” he said. “People literally left everything they had and took off.”

Myers moved to Peoria afterward to become a BUPD police officer until 2007, and now he works as a sales consultant for a Pekin Toyota.

“Ten years later and I still have a hard time with it,” he said. “It’s a part of my life that I’ll never forget. My little girl is what got me out of there.”

Myers was invited to speak on campus in September of 2006 for the five year 9/11 memorial, and he will be back to share his experiences this year.

“A few weeks after 9/11, I started writing everything from that day in a journal, so I’ll be reading from that,” he said. “I share my story because it’s my therapy.”

Myers will be speaking at 4 p.m. in the Renaissance Coliseum as part of the Day of Remembrance program on Monday, Sept. 12.