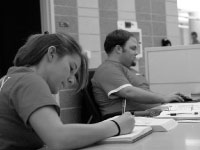 Some students may have recently received a surprise in their financial assistance packages as part of the government’s new stimulus plan.
Director of Financial Assistance Dave Pardieck said with the new plan, some students who meet a certain level of financial need through the FAFSA now qualify for work-study funding.
“As part of the American Recovery and Reinvestment Act, more than $200 million was put into the work study program,” he said. “Virtually every college and university in the nation got funding.”
Pardieck said only students who did not previously receive the funding benefited from the increase, as students receiving work-study previously did not see an increase in their awards.
“It is based on financial need – that is the primary factor,” he said. “The increase in funding will benefit students working in various jobs all around campus.”
However, one employer did see a higher increase than others.
“Students working in the Markin [Family Student Recreation] Center and with campus recreation did receive a lot more funding,” Pardieck said. “But that is mainly because they are by far the largest student employer on campus.”
Students with work-study funding usually get preference for jobs on campus, and those students who receive it also have more opportunities to find jobs.
Junior advertising major Stephanie Schumacher said while she receives work-study funding, she doesn’t currently use it.
“I got lucky and was able to find an internship off-campus,” she said. “But it’s possible that I may be losing my job soon, and it’s a relief to know that I have that opportunity to fall back on. Not all students have that.”
Pardieck said the overall purpose of the extra funding is to “create or retain jobs” on college campuses across the country. However, that isn’t exactly the case at Bradley.
“Our extra funding was awarded to students who already had jobs on campus,” he said. “So it isn’t exactly creating new jobs for other students to fill, but hopefully keeping that steady paycheck will keep students in the jobs they have now.”
Schumacher said she thinks the extra funding is good in theory, but won’t have any real impact on campus.
“The students who received extra money have their jobs already,” she said. “That won’t do any good for someone who may need the extra assistance but can’t find a job. The money may have been better spent if they had found other students to work so they could also have a share in the money.”
More from NewsMore posts in News »