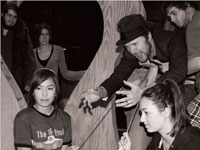 Many students have probably seen at least one of the theatre department’s performances.

And in every play, it is obvious the actors have put a lot of time into learning their lines and how to transform into their specific character, but students sometimes overlook the work that is put into a play by people who never appear on stage.

Specifically, the students who make the props and backgrounds for each play are not widely recognized.

“About 600 hours of work were put into the creation of the set for our musical, The Pajama Game,” said junior theater major AJ Barron. “We would have done double that, but as full-time students, we just don’t have the time.”

Because of time restrictions, Barron said it’s very easy for students working in the shop to get behind schedule.

“It’s very frustrating when we get behind, and since we might have to rush to finish something, there’s a chance we’ll have to redo it if it’s not the way we want it,” he said.

Junior theater production major Lauren Filip said she’s had to work in the shop until early hours of the morning because they were behind on painting the set for Pinocchio.

“We’re scheduled to work in the shop from 1 to 5 p.m. every day, but sometimes we have to stay later to get everything done,” she said. “I’ve needed to get permission to stay as late as 2 a.m. to paint.”

Not only are the hours long, but the shop is not as big as it should be, Filip said.

“The size of the shop should be at least twice as big as our stage, but it isn’t,” she said. “We should also have our own paint studio, but we don’t. I’ve been painting in a corner instead.”

Barron said working in the shop is comparable to “organized chaos” due to the combination of the small space allotted and the time restrictions.

“Everyone knows what they’re supposed to be doing,” he said. “There’s just not always enough space or time for us to get everything done at the same time. Sometimes students who are less skilled help so we can get more done, but the quality may go down and we have to redo things.”

However, both students agreed the experience is worth it.

Filip said her experience painting the set for Pinocchio was a new one, as she usually works on hair and costumes for plays.

“Because we have more shows than we usually do this year, a lot of us have been trying new jobs and branching out a little bit more,” she said. “Although making the set was a lot of work and exhausting, it was fun to see the final product. It was a good experience and I’d definitely do it again.”