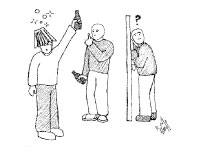 Last spring, the release of the Comprehensive Alcohol Action Plan found many students worried and displeased.
The Alcohol Plan is meant to deter underage abuse and misuse of alcohol by increasing sanctions for violating alcohol policy and offering alternatives to drinking.
Although unpopular, the Alcohol Plan is finding success at Bradley.
On average, students are blowing lower blood alcohol levels on Breathalyzer tests and fewer drinking tickets are being issued, Vice President for Student Affairs Alan Galsky said.
Also, University Police said there haven’t been as many large drinking parties as there have been in the past. And it seems that Campus/TAP hasn’t had much success in finding parties to bust this semester.
The high attendance of the first Late Night BU event, a major component of the plan, is another indication of the plan’s success. Nearly 1,000 students attended the event. That’s almost 20 percent of the student body, which is higher than the student attendance of most men’s basketball games.
So while the plan may not be widely well-liked by the student population, Late Night BU is attracting many students by offering safe, fun alternatives to drinking.
Because of all these factors, it is clear that students are drinking less or with less frequency.
We’re not saying students have stopped drinking altogether. But we do think they’re being quiet about it.
Sure, that isn’t the actual goal of the plan, but if students are being quiet about their drinking, they’re being more safe.
In many cases, at smaller parties, there are fewer opportunities for dangerous activities.
If parties are smaller, things are bound to not get as wild as with larger parties.
The goal of the plan is to create a safer campus, and apparently it’s working.
By this time last year, Bradley had already seen one alcohol-related student death and would see another by the beginning of the spring semester.
A little over a year ago, Bradley suffered the loss of Danny Dahlquist who died when his friends who had been drinking played a fatal prank on him.
This death should have taught students a lesson in drinking responsibly.
And when Robert Hurt died last semester, students should have only taken the lesson more seriously.
No one can speculate why fewer drinking tickets have been issued or why students have been blowing lower BACs.
It could be because students have heeded the warnings of others who have died prematurely because of alcohol-related incidents.
Or it could be because students are afraid of getting caught and punished.
Ideally, students would stop drinking dangerous amounts of alcohol because they are educated and see the potentially deadly effects it can have. But even if they aren’t drinking simply because they can’t afford $375, plus a $50 fine to the university, it’s worth it.
Anything is better than repeating the tragedies of last year.
More from OpinionMore posts in Opinion »