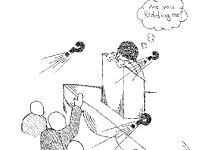 Tuesday night, students were able to confront administrators and ask them questions about problems or issues they have at Bradley.
The event was called “Speak Up!” and some students weren’t afraid to speak their minds, while some administrators kept their mouths shut.
While administrators spoke for most of the two-hour event, almost nothing was said.
From some administrators’ responses, many students surely left unsatisfied.
But the answers they received may not have been the only reason they walked away from the event feeling left out of the loop.
There were issues administrators danced around, such as why Bradley doesn’t give students condoms and what the university is doing about relieving registration waitlists.
But, to their defense, administrators can’t answer questions directed at them from students who are uninformed.
A senior Speech Team member asked why the Speech Team doesn’t receive more funding. She said she feels the funding is insufficient as team members don’t receive as much money as those at other schools.
Jefferey Huberman, the dean of the Slane College of Communication and Fine Arts, answered the question in a surprisingly direct way. Although he couldn’t tell her why the team doesn’t receive more funding or when the members can expect to see a budget increase, he said the team receives enough money to support itself and garner national recognition.
No member of any organization should expect the university to shell out money for fancy dinners while on the road – no matter how many awards the group has won.
When students ask for money blindly, we lose credibility. Some students have legitimate concerns that won’t be taken seriously because uneducated students ask uneducated questions.
We can’t expect administrators to take “Speak Up!” seriously if students don’t bring up serious, real issues.
All administrators who attended Tuesday night are busy. We can’t expect them to take time out of their lives to attend these types of events if students are going to waste it.
We’re not saying students shouldn’t bring complaints to administrators. We’re saying they should be informed before doing so.
It’s the job of administrators to serve students, but it’s the job of students to be educated on how the administrators can serve them.
Many of the questions students asked had already been answered in the Scout. We’re not trying to toot our own horns, but if students read the paper they will be better informed of what is going on around campus.
Students can attend a Student Senate meeting. Much of the change on campus comes out of those meetings, but if students aren’t paying attention they’ll never know.
If students don’t want to talk directly to an administrator, or don’t know whom they should speak with about a concern, they can contact their senators.
Senators are there to help you and are making a good effort to create change that will benefit you.
When students are knowledgeable about campus happenings, they can ask questions that will garner the answers they’re looking for.
We’re not trying to blame students for asking the wrong questions or bringing up their concerns in the wrong ways.
Administrators are at fault here too, for dodging questions and finding loopholes.
But for those actually wanting answers, the key lays in understanding and being informed about the university and the issues it faces.
More from OpinionMore posts in Opinion »