Cost of illegal downloading is more than money 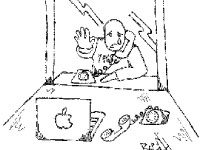 About 10 times more students were caught illegally downloading music last semester than have ever been caught in a previous semester at Bradley.
As of now, students who have been caught sharing their music have been lucky and have only received warnings from the recording industry. But some penalties are harsher – students could face large fines or be taken to court.
Since Napster was created 10 years ago, file sharing has become an epidemic. This is especially true among college students, who tend not to have a lot of money.
But just because file sharing is easy, free and convenient doesn’t mean it’s right – especially not on the Bradley server.
At some schools, students who are caught file-sharing are immediately taken off the university server.
Bradley doesn’t have this policy, but it does take students off who don’t comply after being caught.
Being taken off the server means the student would not have any access to Internet on campus from his or her computer.
Not only does this mean no access to YouTube, Facebook or collegehumor.com, but also no access to B-mail, Blackboard and Webster.
Not only would being taken off the server be an inconvenience, it could hurt a student’s education.
It’s not Bradley’s job to parent us and make sure we’re not downloading illegally by instilling punishments other schools have. But it would be easier for the university if it did, especially if the number of students who get caught continues to rise.
Bradley shouldn’t have to deal with students’ irresponsible and illegal choices. Administrators have more important things to do.
The 75 students who were caught last semester, and the many more who haven’t been caught yet, should consider themselves lucky.
And they should also consider that downloading music from sites such as Limewire and Kazaa is illegal.
Especially with the state of the economy, it’s easy to forget that stealing music from the Internet is just as illegal as stealing from a store.
If legal ramifications and the possibility of being booted from the Bradley server aren’t enough, the state of the music industry should be.
Album sales, including digital singles downloaded to album equivalents, dropped 8.5 percent in 2008 from 2007, according to The Nielsen Company.
Many bands are unable to tour because of the economy, and record labels aren’t afraid to drop bands that aren’t profitable for them.
And the artists and recording labels aren’t the only ones you hurt when you steal music.
Companies that produce the actual disc, stores that sell the music, truck drivers who deliver the music, the producers who make the album and many others are hurt just as much as the artist.
If you care so much about music that you feel you must have access it, you should care enough to support the industry. And if you don’t care enough to support it, why take a risk that is accompanied by such harsh consequences?
Music is easy to access. You don’t even have to leave your house to buy it.
With the invention of iTunes, purchasing music has become easier and more affordable than ever.
If you really can’t afford $10 for an album, maybe you should just listen to the radio.
More from OpinionMore posts in Opinion »