Education funding must be high priority in Illinois 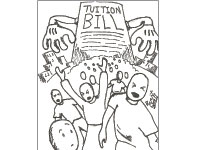 The state of Illinois is facing one of the most, if not the most, challenging economic climates in its nearly 200-year history.
As legislators attempted to pass a balanced budget this summer, Springfield more closely resembled a three-ring circus than a state capitol.
By the time they left in June, no budget had been passed at social services and other groups were looking at 50 percent cuts to their funding.
Fortunately, lawmakers returned a few weeks later to pass a budget that would cover half the year.
There were still steep cuts made across the board to funding of social services and a few other areas, including the funding of the Illinois MAP
Grants.
MAP grants are awarded to college students based on their family’s level of need, which is based on the FAFSA forms filled out each spring.
The program was funded for only half a year, or one semester. This means that 148,000 families across the state could be left with significantly higher tuition bills come January.
These grants are awarded to families who need them the most, the ones who quite possibly can’t afford an additional $2,000 or $3,000 a year for college.
More than 90 percent of students who receive a MAP grant also receive federal students loans, and 95 percent of them receive other forms of aid from Bradley.
There aren’t many families out there who can afford to drop an extra couple of thousand dollars, even for something as important as college.
That amount of money may be just enough to push some families over the edge, meaning there’s an actual risk some students may not be able to return to their campuses this spring.
The missing money shouldn’t become Illinois’ institutions of higher education responsibility, either. Mainly because the amount of money would be too much for the schools to handle.
At Bradley alone, 1,400 students receive the grants. The average amount these  students receive is about $4,733, which means on average each student will be missing about $2,600 come January.
That totals to $3.4 million each semester or $6.9 million a year. $3.4 million is a lot of money for a school to be missing out on.
What is possibly the biggest tragedy is that this lack of funding could have very lasting effects.
Even if the state ends up funding the grants for this year, what about next year? Or the year after that?
People need to be able to know the state will fulfill its obligation, and if they don’t feel they can trust it, odds are many people simply won’t go to college. And that will result in a continuation of endless circles of poverty, for which education is the only ticket out.
It’s time for the state to get its priorities in order.
Writing your representative is something of an often used cliche, but it may actually work in this case. About one in three Bradley students receive a MAP grant, which means everyone reading this knows at least one person who receives a grant.
Every one is always told to write their representatives, and no one ever does.
But this is an actually worthwhile cause, so we urge you to actually get in touch with your state representatives and senators before they head back to Springfield next month.
Go to www. elections.state.il.us to check who your state representative is, then call or write them a letter.
It could make a difference.
More from OpinionMore posts in Opinion »