Journalism on the verge of extinction 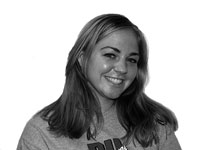 As an aspiring journalist, I’ve always pictured my future self working in the newsroom, covering the breaking stories of the day.
Now, that future is becoming less and less of a possibility.
For those of you who have been playing too many video games over the past few years to pay much attention, here’s a newsflash – newspapers are going the way of the VCR, and it’s a reality that’s been scaring the you-know-what out of me for a while now.
The economy has been affecting jobs in every discipline, but journalism has other problems to deal with as well. The fact that more readers are turning to online sources for news and information threatens to make the local, daily paper a thing of the past.
While meeting with the publisher of a paper back home over Winter Break, O’Fallon Progress, he told me some startling facts.
The Belleville News Democrat, my hometown paper with a daily circulation of about 55,000, recently merged with seven other local papers, cutting jobs in every department.
After the merger, the Progress, along with the six other papers, are now run by the Democrat under a single publisher and share reporters amongst themselves and with the Democrat.
I toured the newsrooms of both the Democrat and the Progress, and I’ll admit I was shocked at what I saw – empty desks, rows of unused computers and, at the Progress, five people doing the jobs that used to employ 15.
Now don’t get me wrong, I was extremely impressed by the fact that as a weekly paper, the Progress only needs three reporters to get the job done. But it’s a scary thought.
The publisher explained to me that the paper’s newest reporter, a kid fresh out of college and barely a year older than I am, had replaced several people because of how diverse his talents were.
Not only could he write, but he had also taken on the duties of online editor, graphics designer and part-time photographer. Talk about having a lot on your plate.
He and the other reporters overwhelmed me with things I needed to do and know about if I want to break into the business.
Although I am only a junior, graduation 2010 seems closer than seemingly possible. While it’s going to be great to get out from under the stress of classes and professors, I’ve got a feeling that getting a real job is going be tougher than I ever imagined.
Maybe it’s how every professor preaches the idea of print journalism as a dying breed.
Maybe it’s just me freaking out that what I really want to do after college may not actually happen.
But maybe it’s all the “Gilmore Girls” my roommate and I have been watching recently.
For those of you who don’t know the story and may not get the reference, let me fill you in. By the show’s seventh season, Rory is about to graduate from Yale and is looking to get a job in, what else, journalism.
Of course, being a Yale graduate, she’s considering applying for jobs at papers such as the Boston Globe and the New York Times, but she faces many of the same problems I’m stressing over.
After rising to become the editor of the Yale Daily News in only her junior year, Rory still gets turned down for a fellowship at the Times.
Now if Rory Gilmore can’t get a job in journalism, then how on earth am I going to do it?
Of course, by the end of the show, Rory lands the perfect job – writing for an online magazine and following the Barack Obama campaign trail (this is 2006, after all), but that’s not the point.
I understand times are hard in every profession. With Caterpillar Inc. instituting a hiring freeze and jobs disappearing across the board, even engineers who seemed set from day one are scrambling to find jobs.
But I’m not in engineering, public relations or education. I’m a journalism major scared out of her mind that she’ll end up living with her parents after graduation.
And let me tell you, that’s a reality nobody wants to face.
Jessica Lampe is a junior journalism major from Belleville. She is a Scout copy editor.
Direct questions, comments or other responses to jlampe@mail.bradley.edu
More from OpinionMore posts in Opinion »