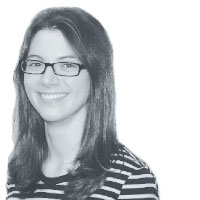 Rodney Dangerfield was definitely onto something. While some of the legendary comedian’s assorted grievances may not resonate with today’s average college student, I’m sure most can relate to his iconic cry of “I don’t get no respect.”
Face it, outside of Bradley’s secluded and secure campus, students aren’t typically viewed in the most gleaming light. Our school may be right up there with Caterpillar in terms of importance in the Peoria area, but a number of native Peorians follow the typical college town mentality of seeing us as doing nothing but encroaching. And with the everyday American still often basing the rigors of college life around films such as “Animal House” and “Revenge of the Nerds,” we students don’t exactly start off with a clean slate either.
Granted, I’m sure some of it’s deserved.
Everyone’s had that 9 a.m. class with the maddening girl or petulant boy whose sole purpose seems to be their ability to take up space, but for every one obnoxious simpleton is a whole host of studious and well-mannered individuals.
It’s just too bad most people don’t seem to realize this. At least I often assume they don’t, seeing as it’s hard to miss the look of contempt most store clerks and restaurant personnel usually give me while hastily swiping my QuickCard.
However, the sad part is I didn’t even realize this generalized lowbrow treatment until attending a brunch at Granite City Food & Brewery this weekend. While the price could put a definite ding in the wallet when compared to the restaurant offerings in Campustown, the extra coin was more than worth it for the service.
The stewards and waitresses were energetic and kind and didn’t even glare at me when my only drink order was a glass of water. The best part was they actually took time to refill it often and promptly despite the place being completely crowded.
While I realize I paid a good chunk of cash for such a luxury, it was nice being viewed as a customer instead of a nuisance. But the fact I had to flash my VISA to get an inkling of respect does show the horrid relationship most stores and restaurants have with students.
For instance, although it’s nice to be reminded by CVS employees that they no longer accept QuickCash, it would be even nicer if they told me without reprimanding me.
The same applies to Save-A-Lot, a store which respects a student’s input so little that it still carried a whole display of cream cheese three weeks after I informed them the product expired back in July.
Although I realize Campustown isn’t exactly the best locale for such treatment, expecting a general adherence to the Golden Rule shouldn’t be too out of line. After all, if a bunch of over-stressed twentysomethings can still be polite and courteous to each other during the hellish week of finals, I think an over-worked employee can manage to find the time to say a simple and candid “have a nice day.”
But then again, I’m just a student. I don’t get no respect.
Lisa Fitch is a sophomore English and economics major from Schaumburg.
She is the assistant Voice editor. Direct questions, comments or other responses to lfitch@bradley.edu
More from OpinionMore posts in Opinion »