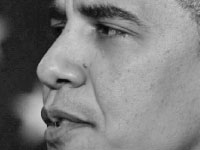 After seeing a president with the lowest approval rating in history wage an unjust war, lead the country into debt and ignore the worst natural disaster to ever hit this country, America needs a change.
This country needs to be rebuilt from the ground up and there is no better person to lead the country toward progress than Sen. Barack Obama.
Obama is ready to take on the challenges that face him. He built his campaign by mobilizing people into action, and he is equipped to do the same for this country.
The senator from Chicago has taken a clear stance on how to rebuild this economy.
He plans on cutting taxes for people who make less than $250,000 a year.
Americans need this kind of break. They need to see government working for them in a time when people have been hit by economic crises.
McCain is a strong believer in trickle-down economics, or cutting taxes for the top earners in the country to stimulate the economy, which has been proven time and again to be ineffective.
With approval ratings of the Iraq War below 30 percent, you would think the presidential candidates would be against the continuation of the war. However, McCain wants to continue the war indefinitely, or until he decides it’s won. But can we ever really win this war? The United States invaded a sovereign nation on completely false pretenses, and McCain wants to continue this farce. We have spent more time in Iraq than we did in Europe during World War II.
It’s time for this war to end, and Obama agrees.
McCain also supports big business at every chance he gets. He fought for the interests of investment bankers and corporations while in the Senate.
Also, his tax plan completely favors only the richest people in the country.
For the first time in history, health benefits would be taxed under McCain’s plan.
He wants to replace employer-provided health care plans with tax credits equaling $5,000 for families and $2,500 for individuals. The issue there is the average cost for an insurance plan is $12,000. That means most people will have to make up at least a $6,000 difference.
This is something that could substantially affect us as students. If our parents no longer have good health insurance plans, neither will we. And when we graduate, we’ll be left to try and get a decent health insurance plan that is actually affordable – something that will be increasingly hard with McCain’s plan.
Not only will it affect us, but it does absolutely nothing for those who have no health insurance right now, and those are the people who need help the most. The state of the health care system in this country is pathetic, and McCain’s plan will only make it worse.
If Obama wins, people who have health insurance provided by their employers won’t see anything change. The only people who will see a change in their plans are those who don’t currently have insurance, and those people will be able to get the same insurance members of Congress receive.
Health care aside, we think a president’s ability to make decisions is crucial to success. Obama chose Sen. Joe Biden as his running mate, and he has a resume full of foreign policy experience. Biden’s experience more than makes up for Obama’s lack of experience in that area.
McCain chose Gov. Sarah Palin solely to appeal to voters. What does Palin bring to the table? Obama chose someone who could help him help his country, while McCain is just trying to get votes.
Obama is the candidate who can substantially alter the direction this country is headed. He has the right ideas about the War in Iraq, the economy and health care. He is able to realize his faults and he understands what to do to make up for them.
At this time, Americans deserve hope and progress. Obama is the face of that advancement and he stands for what America needs to and is willing to accomplish.
More from OpinionMore posts in Opinion »