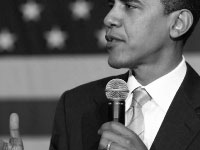 It seems as though more has been accomplished in the first three weeks of President Barack Obama’s administration than former President George W. Bush did in the last eight months of his.
But it’s hard to say whether the economic stimulus bill that passed in the Senate on Wednesday is really as stimulating as it should have been.
Obama was striving for bipartisanship, and we understand that, but with strong Democratic majorities in both houses of Congress, was it really necessary for him to make so many concessions?
Obama catered to many Republican demands, including lowering the cost of the plan and allowing cutbacks in areas such as unemployment benefits and food stamps.
The Republican idea of a stimulus plan is to cut taxes, and while that does help stimulate the economy, there are far more effective methods.
Food stamps are the single best economic stimulator, according to Economics.com.
And in the original plan, the food stamp program would have seen a much greater expansion.
However, the Republican version of the plan significantly cut back on that expansion.
For every $1 put into the food stamps program, $1.73 is generated.
That’s a 73 percent return.
What else gives a 73 percent return? Not tax cuts.
Think about it.
If your parents get an extra $400 in their tax rebate this year, what are they going to do with it?
Unless they plan on going out and splurging on something, it does the economy no good.
But when people get food stamps, they’re going to use them to purchase food and only food. They can’t invest or save food stamps, they can only spend them. And people on food stamps really need to spend them.
That money helps to pay for the store employees’ salaries. It pays the truckers and the farmer who grows the food.
It’s something economists call the ripple effect.
And according to Economics.com, expanded unemployment would give the second largest bang for the buck.
And that’s because the unemployed will spend the money – not save or invest it.
And for every dollar spent on unemployment, $1.64 goes right into the economy.
And while there is hundreds of millions of dollars being spent on unemployment and food stamp programs, it’s really only a drop in a $789-billion bucket.
However, the stimulus plan is a step in the right direction.
It’s easy to see that the plan will give aid to even smaller communities, such as Peoria.
Peoria District 150 has put plans of closing two high schools on hold, mainly because this stimulus plan promises millions of dollars in financial assistance.
And while the money doesn’t come with out strings attached, it will free up funds to help get the district out of debt, at least for a few years.
The district could get as much as $15.4 million during the next two years, according to the Journal Star.
And Caterpillar Inc. Chairman Jim Owens announced Wednesday that if an “acceptable” economic plan is passed soon, CAT would be able to recall some of the 20,000 people laid off in the last two months.
The plan’s provisions for infrastructure, such as building roads and repairing bridges, would likely create more demand for CAT products.
And that could have a huge and immediate effect on the Peoria area.
And with those two examples being so close to home, it’s easy to see the plan in more than just numbers.
You can see the human impact of it.
More from OpinionMore posts in Opinion »