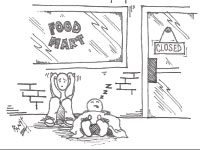 As the Scout reported last week, Student Senate began a push for late night or 24-hour food access on campus this semester.

And as any student who studies – or parties – later than midnight knows, there really aren’t many options right now.

In fact, they are limited to Bacci’s Pizza Express, Jimmy John’s or McDonald’s, assuming they want to stay in the neighborhood.

Life on college campuses tends to run a 24-hour cycle. Students are often awake through the night for various reasons, so it seems like a no brainer that the university should offer a food option later in the night.

It would be especially helpful for underclassmen who must live in the dorms for their first two years and don’t have cars. And because, unlike other colleges, the dorms offer no way for students to cook for themselves, it seems only natural that the school would have a late-night food option.

We recognize the idea presents a number of challenges, especially staffing and funding challenges, not to mention the challenge over where to put a late-night restaurant.

One of the options is to extend Center Court’s hours, but then the problem of staffing arises – that location is staffed by union employees who work under a contract. Another possibility is opening Lydian’s Lounge during the week. This seems like the slightly more attractive possibility as it would create additional jobs for student workers. However, that would mean leaving the University Hall lobby unlocked into the night, with could create some unease among its residents.

There are, of course, ways to counter that problem – mainly the installation of swipe card access to the building, something the university should be moving toward any way.

Whatever the location, it should have the availability of serving actual meals – not just prepackaged cafe food or greasy snack food.

Were not sure what the answer is, and the administrators in charge of this area doesn’t seem too sure, either. We just hope the uncertainty and challenges surrounding the topic of late-night food don’t stop the idea dead in its tracks.

Apparently the business community, outside of the three already-mentioned restaurants, hasn’t recognized the virtually untapped late-night food market on the West Bluff.

That would make the university’s venture into it that much easier.

Ultimately, the food options on campus past 10 p.m. are dismal.

It’s time for a change.

More from OpinionMore posts in Opinion »