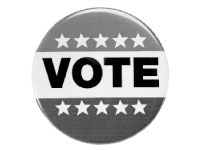 As the largest demographic, you would think politicians would exploit us.
Advertisers target us because they know we’ll purchase their products, and we do.
However, politicians don’t spend a dime on us, probably because young people simply don’t vote.
Last week, former MTV journalist Gideon Yago gave the fall Robison Lecture, and even he admitted to writing in Ken Griffey Jr.’s name on his ballot in 1996, the first time he voted, because he didn’t think his vote counted.
He was wrong.
People tend to forget there are important things to vote for other than president.
Look at any ballot in any state this year and you’ll see more than just presidential candidates. You can vote for senators, representatives, county board members and referendums. Each and every choice on your ballot is important.
To say or think your vote doesn’t count is irresponsible. Ask any local politician and we guarantee he or she will be able to tell you about an election in which the winner only won by a handful of votes.
Maybe Sen. Barack Obama or Sen. John McCain won’t need your individual vote to win the presidency, but your hometown mayor might.
And when it comes down to it, local politics have a much more immediate effect on your life.
Think about it.
Local school boards approved the curriculum in school districts where you were educated. Library boards approve budgets that allow local libraries to purchase books that you borrow. County board members vote the amount of sales tax people will pay for everything we buy.
And while the state and federal governments have a say in those things as well, the president of your local school board is probably going to take your phone call. The governor is not.
When most people head into the voting booth, they never even consider just how large of an influence they have on the world around them.
We’re not saying voting for president isn’t incredibly important, we’re just saying there’s so much more to your vote than most people think.
Do you know who represents you in the state legislature? You should. Most students are paid minimum wage, and the state legislature sets the level of that wage.
The representatives we vote for in this November will have a say in how much money the government gives us for grants and loans. That’s going to affect almost everyone reading this.
As young people, we are the ones who have the most at stake in this election because we will be the ones living with the decisions made for the longest amount of time.
So when you head into the voting booth on Tuesday, or even when you head into the voting booth for any other election, be aware that you have an influence.
After this election ends, politics still continue. They will remain important in your city and your school, so keep voting and keep being involved.
More from OpinionMore posts in Opinion »