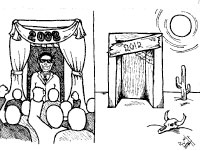 On Tuesday, you showed up to the polls in near record numbers.
In Illinois alone, one in five people who voted was between 18 and 29 years old.
Thank you.
Your voices were heard loud and clear and you were decidedly in favor of Sen. Barack Obama.
And he won with your help.
Obama won a majority of the youth vote in 41 states, according to CNN exit polls.
Not only did you show up to the polls, but many of you helped build and develop Obama’s campaign.
Even at Bradley, a university recognized as one of the most politically apathetic in the country, Obama supporters were hard at work canvassing in swing states and trying to get the word out.
Members of Students for Barack Obama even gave up many Saturdays to help the former Illinois senator gain votes.
If this election doesn’t prove to you that your vote matters, what will?
The large turnout at the polls and the increased participation in politics is huge. From now on, politicians can’t ignore the largest demographic in the United States.
And we can’t start ignoring them either.
We helped send Obama on his way to the White House, but this country isn’t just going to heal itself overnight.
Obama may help solve some of the crises this country faces, but he is not a magician.
The troops will not return home from Iraq tomorrow and it will take considerable time for the economy to bounce back from a near recession.
We are still going to face the harsh reality of trying to get jobs in a country riddled with high unemployment rates. We are all going to have to deal with being able to afford health care.
We cannot stop caring just because our favorite politician has won. The country’s problems are just as real as ever because now is the time we have to face them and fix them.
And for those of you who voted for Sen. John McCain, don’t get discouraged. Your opinions are needed as well. This country needs you to help bridge a partisan divide and shed light on the other sides of issues.
If you feel as if you’re not represented in government, don’t just sit around and complain about it.
Call your state representative or congressman. Do anything that can make even the slightest change.
Don’t let this momentum and drive die down. The next election will be just as important as this one, so stay involved and pay attention.
Learn about the issues and understand how you can help.
Your voice will be heard but only if you speak up.
Write a letter to the editor of a newspaper or to a local politician. Go to a city council meeting.
Choose a cause you believe in and try to drum up support.
We have proven we can ban together for a cause, so why stop now?
More from OpinionMore posts in Opinion »