A new season, a fresh start for volleyball 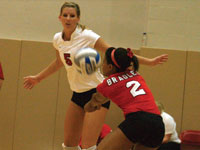 The Volleyball team started off the 2009 season placing second in the Hotels at Greand Prairie Invitational.
Bradley hosted the Invitational at the Markin Family Student Recreation Center last weekend.
With each of the five teams, including Bradley, Chicago State, IUPUI, South Carolina-Upstate and Lehigh, looking to start their seasons off with a bang.
The Braves’ Friday morning began with a match against South Carolina-Upstate.
Freshman outside hitter Alise Tupuritis came ready to show what she could bring to the court, accumulating 17 kills, three service aces and nine digs with an addition of 13 kills and three service aces from sophomore outside hitter Annie Cave.
None of this would have been possible without freshman setter Skylar Lesan and her 43 assists and sophomore defensive specialist Genevieve Dejean with her 15 digs.
Tupuritis said the freshmen would each bring something to the team.
“We’re going to change the volleyball program, definitely,” she said.
Other freshmen on the team agreed despite challenges, they’d make an impact.
“Sam Black’s spot was really hard to fill,” Lesan said, “But I’m trying my hardest to do it.”
The Braves won the first set 25-16, but South Carolina-Upstate fought back in the second, winning it 25-23.
The Braves finished off their opponent in the last two sets with 25-18 in the third and 25-20 in the fourth making the scores of 3-1 overall.
The next match was against Chicago State Friday night. With a win on their shoulders, the Braves were determined to get another.
Sophomore middle blocker Megan Schmidt came out fired up going 10 for 10 in kills and came out of the game with a .769 kill percentage for the match.
With the help of senior outside hitter Amy Reichel’s seven kills, Dejean’s eight digs and Lesan’s 30 assists, the Braves overwhelmed Chicago State, sweeping them 3-0.
On Saturday, the Braves were ready to put up more wins.
Lehigh looked like an easy win, being ranked low at the start of the tournament, but came out determined for redemption from a bad start.
The game featured many ties and lead changes with the Braves coming back in both the first and second to gain the win of each set.
Lehigh made an attempt to come back, trailing in the third and gaining the win for the third set, but the Braves finished out the fourth gaining the win.
Tupuritis and Reichel both had 17 kills, Reichel with a .517 kill percentage and Tupuritis finished with a double-double, gaining 16 digs.
Cave also added to the number of kills with 12. Lesan also had 49 assists throughout the match.
If the Lehigh game was a battle, then the IUPUI game was a war.
Each team walked onto the court with a 3-0 record to start the season, which the Braves hadn’t done since 2000, and looked to grab the tournament title.
Tupuritis gained another double-double with 11 kills and 11 digs and Dejean gained a career high 20 digs.
Schmidt accumulated seven blocks, two solo and five assisted, yet the Braves fell after four with IUPUI winning the first, second and fourth sets.
“We were neck and neck in the fourth set,” coach Sean Burdette said. “The errors are what ended up killing us though.”
The small mistakes were hard on the players as well.
“We should’ve won it; it was just the little things that killed us,” Tupuritis said.
The game featured 16 ties in just the first set and eight lead changes in the first as well, making this a battle well fought.
“I think we had a very good first tournament,” Schmidt said. “We have a lot of kinks to work out in practice, but I think we can do it.”
The tournament closed with IUPUI (4-0) earning the title, with the Braves (3-1) coming in second, South Carolina-Upstate (2-2) in third, Lehigh (1-3) in fourth and Chicago State (0-4) in fifth.
Tupuritis and Schmidt both gained all-tournament honors.
Burdette said he thinks the Braves will build off the weekend’s loss and come back ready to play.
On Tuesday, the Braves continued their home court campaign against Northern Illinois.
The Huskies took the game 3-0 over the Braves. In the first set, NIU took a 19-10 lead when the Braves answered with a 9-3 run. The run was lead by Schimdt with one kill and two blocks.
The second set was a lot closer, featuring eight ties before the Huskies finally pulled away, 25-20.
In the third set, the Braves were no match for the Huskies as NIU ran away with a 25-13 victory.
Tupuritis led the Braves overall with 10 kills.
This weekend, the Braves will head to Virginia to play in the Radford Invitational. They open play with South Carolina State.
More from SportsMore posts in Sports »