Baseball drops another game to Illinois in Champaign 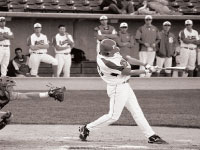 For the second time this season, the Bradley baseball team fell to in-state rival Illinois 8-5 in Champaign.
The two teams met on April 6 in Peoria with Illinois coming out victorious by just a run with a score 11-10.
Illinois jumped all over sophomore pitcher Jacob Booden in the bottom of the first inning. The Fighting Illini scored three runs on four hits to take an early 3-0 lead.
The Braves answered in the top of the second when sophomore designated hitter Brad Kimball hit a two-run homerun to bring Bradley within a run at 3-2. The homerun was Kimball’s fifth on the season and his third in two games.
In the top of the third, the Braves evened the score at three with an RBI single by senior catcher Kevin Sullivan.
After Illinois tacked on a run in the third, the game got away from Bradley.
In the bottom of the fourth, the Illini’s Michael Giller hit a three-run shot that gave Illinois a commanding 7-3 lead.
The three-run homerun ended Booden’s night. He gave up ten hits and six earned runs in just four innings of work. The Bradley left-hander took the loss, which lowered his record to 3-3.
The Braves didn’t score again until the eighth inning. Two Illinois errors allowed Bradley to cut the lead to 8-5, but in the ninth the Illini’s relief pitching did its job, holding the Braves scoreless in the frame to take the victory.
Seven of Bradley’s eight hits came from the first five guys in the order. Senior second baseman Matt Fritz, who is leading the team with a .373 batting average, and Sullivan each had two hits and a run scored.
Sophomore pitcher Justin Ziegler came on in relief of Booden and pitched four innings giving up just one earned run.
The loss dropped the Braves’ record to 12-24.
Fritz said the team’s struggles aren’t a lack of talent.
“We know we can play with good teams,” Fritz said. “We’ve proved it since the first series. We just need one series to really turn it around and get our confidence level as a team back to where it was.”
Bradley plays a doubleheader  at noon on Saturady at O’Brien Field against Calumet.
More from SportsMore posts in Sports »