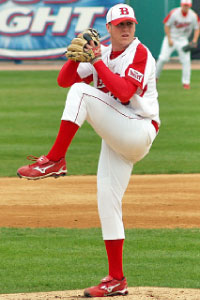 The baseball team picked up its first Missouri Valley Conference win of the season during the weekend, but the Braves lost their series with Evansville at O’Brien Field.
Bradley dropped two-of-three to the Purple Aces, which puts them at 1-9 in the MVC, placing them at the bottom of the conference.
“We have had a rough start in conference,” senior Adam Kimball said. “But the good thing is that we still hold our own fate as we have four more conference series that we can win.”
Junior Brad Altbach wasn’t able to get through the third inning in the series’ opening game.
After giving up eight runs, two earned in just two and two-thirds innings, coach Elvis Dominguez replaced Altbach with freshman Joe Bircher.
Bircher gave up just three runs through the rest of the game, but the damage was done and the Bradley lost the game, 11-4.
The Braves got strong starting pitching performances in each of the last two games.
Junior Rob Scahill took the mound in the second game and recorded Bradley’s lone win of the weekend.
He pitched eight and two-thirds innings striking out 12 hitters on his way to his first career MVC victory.
The 12 strikeouts was an O’Brien Field record for most strikeouts in a game – college or professional.
Scahill hit 94 mph on the gun in the game and allowed three runs, all of which were unearned in the 6-3 win.
Senior Bryan Porter came on to record the final out of the inning and pick up the win.
Senior Collin Brennan followed pace, turning in a gem of his own in the Braves’ third game of the series.
Brennan turned in nine solid innings, striking out nine and giving up two runs, but the offense could not back him up and the game went to extra innings.
Porter came on in relief of Brennan in the 10th but did not have his best stuff.
Porter walked the first two batters, hit the third, and walked in the fourth to give the Purple Aces the go-ahead run.
Senior Tyler Thorton took Porter’s place and ended the damage, but it was too late as the Braves couldn’t score in the bottom of the inning.
“We just need to come together as a team and believe that we can do better,” Kimball said. “We know we are good enough, but we have yet to fully show that on the field.”
Offensively, Lutrell stood out for the Braves, going 7-for-11 in the series and scoring two runs.
After hitting a homerun in the second game, Kimball had his 16-game hitting streak snapped on Sunday.
Kimball said it was “awesome” to have the streak, and he intends to start another one shortly.
On Wednesday, the Braves traveled to Eastern Illinois and defeated the Panthers 15-8.
Bradley’s bats were hot, as the team hit a season-high four homeruns in the contest.
The Braves will continue MVC play this weekend when they take on the Creighton Bluejays.
Bradley did the majority of its damage in the seventh inning.
Down 7-4 to start the inning, the Braves began to rally.
Junior Grant Escue hit a 3-run homer to put the Braves ahead, and Fitzgerald hit a grand slam later in the inning to cap off the nine-run inning.
Bradley used seven different pitchers in the game, and they combined to give up just one run.
The Braves will return to action today when take they on the MVC-rival Bluejays of Creighton.
More from SportsMore posts in Sports »