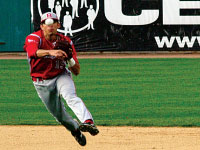 Bradley’s baseball team suffered its sixth one-run loss of the season in high scoring fashion to the University of Illinois 11-10 at O’Brien Field.
After an inning and a half, the Braves trailed 4-0. Then the team’s offense went to work. Bradley scored two runs in the second and three runs in the third to take a 5-4 lead.
In the fourth inning, Illinois answered with three runs, but Bradley kept its one-run lead in the bottom half of the inning by scoring three runs of its own.
Senior catcher Kevin Sullivan had a two-run double with the bases loaded and senior first baseman Mike McMillian added a sacrifice fly.
In the fifth and seventh innings, Illinois and Bradley each traded a run and after seven innings, the Braves still held a one-run lead at 10-9.
Illinois took the lead for good in the top of the eighth. With two outs, the Illini had a double and two singles to plate two runs with a 11-10 lead.
Freshman outfielder Mike Tauchman hit his first career home run and junior outfielder Brian Martin finished the game 3-for-5 with two runs scored and a RBI.
Sophomore pitcher Jacob Booden said the team needs to step up its play to pull out victories in one-run ballgames.
“We have been losing a lot of close games, and I think as a team we need to stay focused throughout the whole game and come out with intensity for nine innings,” he said. “We are a young team and it’s just a matter of getting in a groove.”
Senior infielder Matt Fritz also expressed frustration with all the close losses.
“It is frustrating because throughout those games we have had opportunities to take a lead and we don’t capitalize on them,” he said.
More from SportsMore posts in Sports »