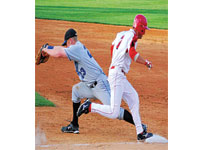 The Bradley baseball team continued its roller coaster season losing two of three at home to Creighton University.
In game one, the Bluejays scored a run in the top of the first inning on a single, sacrifice bunt and another single to take an early 1-0 lead.
Senior infielder Matt Fritz answered in the bottom of the inning with a leadoff solo homerun to tie the game.
In the second inning, Creighton got to Bradley sophomore starter Joe Bircher. The Bluejays scored four runs on four hits to take a commanding 5-1 lead.
The Braves trailed 7-2 in the bottom of the ninth when freshman outfielder David Compitello hit a three-run homerun to make the final score 7-5.
Fritz, sophomore infielder Rob Elliot and senior first baseman Mike McMillian each had two hits.
Sophomore pitcher Jacob Booden started game two of the series holding Creighton to three runs, just one earned in six innings of work.
After five and a half innings, the Braves trailed 2-0 and then the Bradley offense exploded for eight runs in three innings.
In the sixth, Bradley scored three runs on three hits. Fritz had an RBI triple in a two-run seventh inning for the Braves to open up a 5-3 lead. Bradley added another three runs to the scoreboard in the eighth, sparked by a two-run double by McMillian.
The Braves pounded out 11 hits on the game and won 8-4. Junior outfielder Brian Martin had two hits and two RBIs in the victory.
The rubber match of the series was no competition. Creighton led from start to finish and at one point led 9-0 before winning 12-3.
In the top of the first, the Bluejays exploded for five runs off Bradley senior starter Brad Altbach. Creighton then scored a run in the second, third, fourth and fifth to take a commanding 9-0 lead.
Senior catcher Kevin Sullivan and freshman Jason Leblebijian each contributed two hits in the losing effort.
Bradley pitching was battered giving up nine hits and 12 runs.
More from SportsMore posts in Sports »