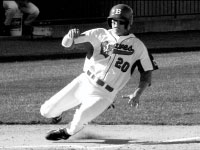 The baseball team continued its run of close losses in a weekend series with Missouri Valley Conference power Wichita State.
The team lost three games at Eck Stadium in Wichita, Kan., including one in extra innings.
In the first game of the series, junior Patrick Cooper was locked in a pitcher’s duel through four innings. However, in the fifth, the Shockers exploded for three runs on four hits. Wichita State added two more runs in the sixth inning to make the score 5-0.
The Braves managed only one run in the game when sophomore Brad Kimball delivered a pinch-hit solo homerun in the top of the ninth. The final score was 5-1.
The next day, the Braves attempted to rebound from the game one loss. Game two started horribly for the team, trailing 9-1 after two innings.
Slowly the team began to chip away at the lead. After adding two runs in the third and another in the fifth, the Braves trailed 9-4.
Wichita State answered with two runs in the sixth inning, but Bradley exploded for four runs in the top of the seventh to bring the score to 11-8.
Neither team scored again and the Shockers won game two of the three-game set.
Senior Kevin Sullivan went 2-for-5 with three RBIs, and freshman Mike Tauchman added two hits and two RBIs.
The third game of the series began like the first. Through three innings the game was scoreless, but in the fourth, Wichita State struck first with an unearned run off sophomore Jacob Booden. Booden pitched six innings and gave up just four hits and the one unearned run while striking out five.
The game remained a one-run advantage for Wichita State until Kimball again came through with a bases-loaded walk in the eighth to tie the game.
The Braves held Wichita State scoreless in the eighth and ninth to send the game to extra innings.
Bradley went quietly in the top of10th. The Shockers began their half of the 10th with two singles and eventually loaded the bases with one out. Jensen then made a mistake to Wichita State’s Cody Lassley that he didn’t miss. Lassley sent the Jensen pitch over the left field wall for a walk-off grand slam and a 5-1 Shocker win.
The Braves played in their first home game of the season and lost to Northern Illinois 8-3.
More from SportsMore posts in Sports »