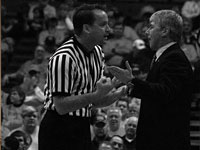 After committing to Bradley’s basketball program a month ago, Walter Lemon, Jr., a 6-foot-3 combination guard, officially became a part of the Braves squad last Wednesday, signing a National Letter of Intent.
Lemon played high school basketball at Julian High School in Chicago. He averaged 19 points, five assists and five rebounds and was named third-team all-state by the Illinois Basketball Coaches Association last season. Lemon also earned 2010 second-team All-Chicago Public League honors.
“We are very excited to add a highly-skilled and explosive athlete to our basketball family,” said Bradley head coach Jim Les. “Walter is a tremendous young man and will fit into the Bradley environment very easily and his future is very bright, both on and off the floor.”
Lemon competed in the annual Illinois-Missouri All-Star game scoring a team-high 21 points in a 98-87 Missouri win.
He chose Bradley over offers from Southern Illinois, Loyola, New Mexico State and Detroit.
“I liked the atmosphere and everything about the campus,” Lemon said. “I like the team, I like the coaching staff, I like their colors, I like the way they play.”
Lemon is known for his explosive athletic ability. A reporter for Ramseybasketball.com watched Lemon play in the Illinois-Missouri all-star game and wrote: “Bradley University signee Walter Lemon of Chicago Julian simply took over the game with his incredible leaping ability and mid-range game. Lemon will be a star at Bradley as he delighted the fans with his quick first step, his precise stepback jumpers and his ridiculous jumping ability.”
With the addition of Lemon and because of the departure of sophomore guard Eddren McCain Bradley has two scholarships left to give for the 2010-2011 season. The spring signing period concludes May 19. Bradley is able to sign players up until that date.
More from SportsMore posts in Sports »