Bradley baseball swept by Creighton: Braves in position to win all three but let leads slip away 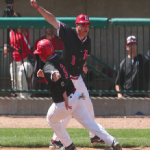 The Bradley baseball team was in position to win their first three-game series of the year. Except every time they thought they had breathing room, they choked up their lead.

Finding reliable pitching has plagued the Braves all season, and cost the team two late-inning leads against the Creighton Blue Jays last weekend.

“The way Creighton plays is that they want you to beat yourself instead of them beat you and that’s exactly what they did,” senior pitcher Andy Johnson said. “They didn’t make one error all weekend, their pitchers threw strikes and our pitchers got themselves in a lot of holes through walks.”

Bradley used a 4-run seventh inning to take a 4-2 lead in the series opener Friday.  Yet Creighton responded by scoring two runs on a fielding error before a RBI single gave the Blue Jays a 5-4 lead that they would never relinquish.

Saturday, the Braves used a four-run fifth inning, fueled by a bases-loaded triple by senior Mike Tauchman, to tie the game 5-5. Tauchman extended his hitting streak to 21 games through the weekend and leads the team with a .407 batting average and 28 RBIs.

“It’s funny because when a guy is on second and Mike is up to bat, you expect him to be in [to score],” Johnson said. “It seems like he gets two or three hits every game too. Also, his work in left field doesn’t get as much attention as it should.”
The Blue Jays completed the sweep Sunday with a 7-3 win. Bradley loaded the bases with one out in the second inning but only managed one run on a walk. Creighton took a 3-1 lead in the bottom of the second inning on a two-run double, and extended it to 5-1 by the eighth inning. However, the Blue Jays scored in the bottom of the fifth inning after a leadoff single turned into a runner on third from a stolen base and wild pitch. A RBI single up the middle gave Creighton a 6-5 lead that later turned into a 7-5 win.

Tauchman drove in freshman Nolan Sponsler, who led the inning with a triple, to cut the lead to 5-2. The Braves added one more run on freshman Paul Solka’s RBI single but ultimately couldn’t get enough runs to take the lead.

Bradley will host Wichita State for a three-game series this weekend beginning at 6 p.m. Friday at Peoria Chiefs Stadium. The Braves will then head to Northern Illinois a mid-week game at 3:05 Tuesday.

“It’s one of those things that once you hit the showers after that last game at Creighton, you have to forget about it and move on to the next game,” Johnson said. “I think Wichita State is a good team, but we have a lot of talent too. If we go out and execute pitches, get timely hits and get on base, there’s no reason we can’t beat them.”