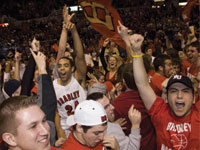 For first time in the history of Carver Arena, the Bradley Braves gave the student body a reason to storm the court.
The college tradition of showing school pride after knocking off a ranked opponent on your floor had proved elusive for the Braves since Carver Arena’s opening for the 1982-83 season.
With a 68-59 home victory over 18th ranked University of Northern Iowa Panthers, the Braves improved to 2-0 against top-25 foes on the season.
The game started off looking bleak for the Braves, who didn’t hold a lead in the first half.
The Panthers used 45 percent shooting to control the first half.
But the second half was an entirely different story.
The Panthers were held to 19 percent shooting and made only three of their 16 attempted 3-point shots.
“We responded to Coach Les’ halftime speech really well,” junior Andrew Warren said.
The Braves came out of the break, as Dan Patrick says, “en fuego” with an 11-point run and took the lead for the first time all game.
A 9-1 run midway through the second half started to put the game out of reach for the Panthers, and without forward Adam Koch, who fouled out, a comeback proved unattainable.
The Braves used a balanced scoring attack and 57 percent shooting in the second half to defeat the Panthers. Warren led the Braves with 15 points, all of which came in the second half, and sophomore Taylor Brown corralled a team-high seven rebounds.
“Coach is always looking for someone to step up and make a play,” Warren said.
Senior Chris Roberts had 13 points, and Brown and sophomore Will Egolf each had 12 points.
“So many times this season, we have been up nine or 10 at half and [opposing teams] come out and make the plays so I knew we could do this,” Warren said.
The Braves lost to Indiana State in overtime 75-69 on the road. Sophomore Taylor Brown lead the Braves with 13 rebounds to go with his 14 points. Junior Sam Maniscalco had 15 points of his own. Freshman Dyricus Simms- Edwards added 14 off the bench.
More from SportsMore posts in Sports »